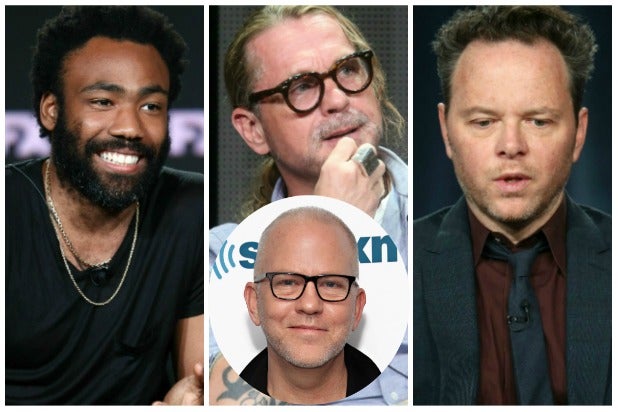 Ryan Murphy left Fox in the dust late on Tuesday, when the “American Horror Story” and “American Crime Story” creator inked quite the rich deal with streaming service Netflix.

The new agreement, which is reportedly worth as much as $300 million, allows Murphy to withdraw himself (on a going-forward basis) from Disney’s pending takeover of Fox’s studio and cable channel FX, among many other assets.

“I got a call from Mr. Iger, and I said point-blank that what I do is not specifically Disney, and I’m not interested in that and I’m concerned about that,” Murphy said last month at the Television Critics Association (TCA) press tour. “I’m like, ‘Do I have to put Mickey Mouse in ‘American Horror Story’ now?'”

Nope, not now. But does Murphy’s blow-dealing move to the safe harbor of streaming pave the way for Fox’s other key FX showrunners, Kurt Sutter, Noah Hawley and Donald Glover to follow suit? After all, Netflix affords arguably the greatest creative freedom of any media platform, and Disney can be the most restrictive — from a censorship standpoint, at least.

“Sons of Anarchy” and “Mayans MC” creator Sutter just signed a new Fox deal a few weeks ago, months after the Disney acquisition was announced. So that guy knows what he’s getting into — as much as anyone can, that is.

“In a scary world of orange monsters and spontaneous castrations, Fox 21 and FX is my ‘safe place’ where I feel loved and appreciated,” Sutter said at the time.

OK, so FX is definitely keeping one even when it seeks shelter under the Disney umbrella. “Mayans” will premiere later this year, which happens to be roughly the same timeline the Disney-Fox deal is expected to close. Sutter’s “The Bastard Executioner” was definitely not Walt Disney fare, but that series was dead on arrival anyway.

Might wanna tone down the “castration” stuff when you head to Disneyland though, Kurt.

To be fair to all parties involved here, this is as good a spot as any to point out that both Disney boss Bob Iger and FX chief John Landgraf have maintained throughout this process that the parameters guiding their soon-to-be shared programming will not change from the current, successful setup.

Also Read: Here Is the $10 Billion Reason Why Disney May Lose Its Fox Deal

Glover’s overall deal with FX Productions was signed a year before Sutter’s, so at the time he had no idea what the fate of his network and studio would become.

Under that agreement, the “Community” alum will develop television series for FX Networks (FXN) and other networks and streaming services, in addition to continuing to executive produce, write, direct and star in the TV-MA “Atlanta.”

We haven’t seen enough out of Glover’s mind to know whether his original stuff could fit in with Disney’s family friendly environment — his main creation to this point isn’t as tame as that “Star Wars” and “Spider-Man” acting stuff. All the “N”-word usage, gun violence and sex in “Atlanta” isn’t really what the aforementioned Iger tends to go for. But again, if FX is truly going to continue operating its own way, that may not be an issue at all. Only time will tell how “Disneyfied” any adopted assets become.

Mark Glover’s future at what we’ll call “Old Fox” for now down as “Inconclusive.”

Hawley is, perhaps, the most interesting of the bunch. His last overall deal with FX was signed in December 2015. It was for three years, which means he’ll be up for grabs by this holiday season.

There’s a hint of what’s to come here though: Hawley has said more “Fargo” should be ready for 2019. Does that mean an extension is coming? Or could Hawley cut bait and move on?

The former option seems more likely than the latter one, and the fairly tame (by comparison) content of “Fargo” and his “Legion” could fit in just fine with Disney. Plus, Hawley is generally considered a homegrown talent incubated at FX. He works exceptionally well with the highly respected Landgraf, who most writer/producers love having on their side.

“Noah Hawley, who has become quite a busy bee… has told us that he has an idea that excited me enormously for a fourth cycle of ‘Fargo’ and the plan is to have that ready in 2019,” Landgraf said at the last TCA event. “The anticipation is there will be another cycle of ‘Fargo’ in 2019.”

And what about Murphy’s former protege and current producing partner Brad Falchuk (“Pose,” “American Horror Story,” “9-1-1,” etc.)? Well, he’s got to stay the course for a while regardless.

You see, Falchuk signed a multiyear deal with 20th Century Fox back in February 2016. Though Fox didn’t specify the terms of the deal then and won’t comment now about its length, most of these contracts are for three years. That means Falchuk couldn’t follow Murphy out the door until a year from now.

That said, Falchuk and Murphy’s musical series “The Politician” already exists at Netflix, so he’s already got a foot in the door there.

In addition to “The Politician,” Murphy was already working on Netflix’s “One Flew Over the Cuckoo’s Nest” prequel series “Ratched,” starring Sarah Paulson.

Poaching Murphy from his longtime home of 20th Century Fox TV is a huge get for Netflix, which pulled off a similar coup last year when it lured away ABC-hitmaker Shonda Rhimes with her own rich multi-year deal.

Since creating “Nip/Tuck,” one of the first major original programming successes at FX, Murphy has created and produced a number of popular television series for Fox and FX. He currently oversees five shows at the two networks, “American Crime Story,” “American Horror Story,” “Feud,” “9-1-1” and the upcoming “Pose,” all of which will continue at their respective network homes.

“The history of this moment is not lost on me,” Murphy said Tuesday in a statement about his new deal. “I am a gay kid from Indiana who moved to Hollywood in 1989 with $55 dollars in savings in my pocket, so the fact that my dreams have crystallized and come true in such a major way is emotional and overwhelming to me. I am awash in genuine appreciation for Ted Sarandos, Reed Hastings and Cindy Holland at Netflix for believing in me and the future of my company which will continue to champion women, minorities and LGBTQ heroes and heroines, and I am honored and grateful to continue my partnership with my friends and peers at Fox on our existing shows.”

Netflix and Disney did not respond to our requests for comment on this story. FX and 20th both declined comment.