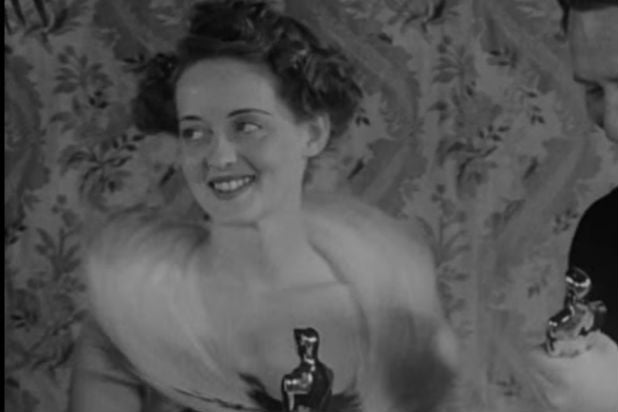 FX’s “Feud: Bette and Joan” is full of larger-than-life moments — like the one where Bette Davis reveals that she cuddled her Oscar so intensely that its gold plating came off.

As the juicy retelling of the blood rivalry between Davis and Joan Crawford hit its crescendo, the anecdotes are flying out at top speed. This one sounds the most incredible, so we asked the show’s creator, Ryan Murphy, about its accuracy.

The scene in question arrived on Sunday’s fifth episode of the limited series, a cathedral of a midseason marker titled “And the Winner is… (The Oscars of 1963).” It finds Susan Sarandon’s Davis and as show business legend Olivia de Havilland in Davis’ L.A. living room. The pair look at Davis’ two Best Actress Oscar statues, as she’s about to attempt a historic third win  for “Whatever Happened to Baby Jane?”

“Bette, what happened to this one?” Jones asks one of one of the Oscars, visibly duller than the one at its side. “Did all of the gold plating fall off?”

Davis smiles: “It rubbed off. Every night when I watch television in bed, I hold it. He’s the perfect companion.”

The line is a great way to set impossible expectations for that night’s ceremony — where not only would Davis lose, but Crawford would conspire to accept the trophy on behalf of winning actress Anne Bancroft, just to spite Davis.

But — did Bette Davis really rub the plating off her Oscar by holding it in bed each night?

Murphy met with Davis shortly before her death in 1989, he told TheWrap, and they had the exact same conversation he would later write and direct — with de Havilland asking the question he asked in real life.

“I walked into her apartment — she died several weeks later — and the first thing she said to me was, ‘Do you want to see my Oscars?’ She took me into a room, and one was more gold than the other one,” Murphy said.

“It looked like it had not been rubbed off by time, but worn. I said, ‘What happened to this one?’ She said, ‘I hold it at night when I watch TV. It’s my friend.’ I never reported on that fact and I wanted to use it,” said Murphy.

The scene with Sarandon paints a heartbreaking portrait of “survival,” as Murphy put it. “That big speech [she gave me] is in there —  that the Oscar reminded her of when she was loved.”

Davis’ Sarandon wraps the scripted scene with this:

“Sometimes, when I need it, he reminds me of that perfect night when I won him. The whole world stood up and cheered. I was loved.”

"American Psycho" author Bret Easton Ellis is not one to hold back from airing his often-controversial thoughts -- over the years, he's cultivated the personae of an expert rabble-rouser. Here are seven people (and two TV shows) he's unleashed his wordy wrath upon.