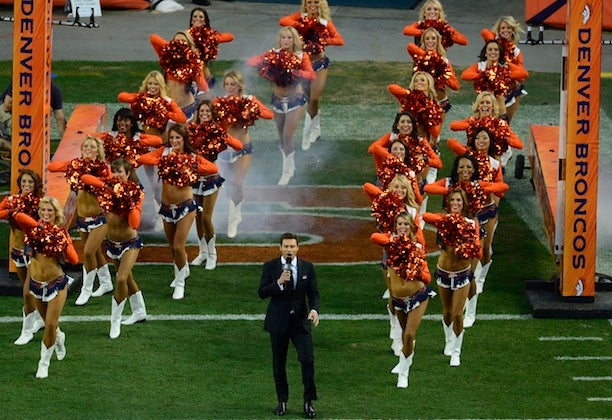 NBC kicked off the NFL season Thursday night with Ryan Seacrest … and a hail of boos.

The “American Idol” impresario, whose connections to NBC include his deal with E! and the peacock’s new game show “Million Second Quiz,” was chosen to introduce the network’s 2013 NFL season opener from the field Thursday night. As “The Final Countdown” played over the Sports Authority Field’s ample speakers, the Denver public address announcer asked the home crowd to welcome … Ryan Seacrest.

The boos rained down from a mile high as the TV and radio personality was flanked by cheerleaders in the corner of a Denver endzone. Seacrest immediately made a “Rockin’ New Years Eve” joke that nobody seemed to care about.

“I only know of one other countdown that might be as big as this one,” Seacrest said. “America is ready for 17 weeks of excitement, followed by the drama of the playoffs, all culminating in New York at the Super Bowl.”

“So come on Denver, let’s join these football greats — representing all 32 teams — and ring in the NFL season!” Seacrest said, cueing up a promotional countdown video and ignoring the disapproving crowd. “Here we go!”

Only the game didn’t go. It was delayed 33 minutes due to lightning in the area.

But the thunder was on Twitter, where the odd confluence of Seacrest and the NFL flushed out the boo-birds online, too.
A sampling:

Ryan Seacrest officially starting football is like the Jaguars in a primetime slot. #ShouldntHappen