A conservative street artist has vandalized a billboard across the street from CBS Studios in Los Angeles by pasting a fake ad for Sacha Baron Cohen’s new Showtime series “Who is America?” over a billboard for the sitcom “Young Sheldon.”

“It seems there’s no depth the Hollywood Left would not sink [to] after hearing Sacha Cohen was running around masquerading as a disabled American veteran,” artist Sabo told TheWrap, exclusively, taking credit for the billboard. “And no, the damage control Showtime tried to pull by saying Cohen was equally going after the Left because he took a stab at Chelsea Clinton and Bernie Sanders is not good enough.”

He added: “Maybe Sacha Cohen should focus on the joke that is his country, England.”

The billboard (pictured above and below in exclusive photos given to TheWrap by Sabo) gives the wrong tune-in time for the Showtime show — which premiered on Sunday — and promotes Sarah Palin’s assertion that the actor insulted the U.S. military by posing as a wounded veteran as a prank to get her to agree to an interview.

The fake ad shows an image of Cohen seated in a wheelchair, wearing a U.S. Army t-shirt and a “Make America Great Again” hat. He’s also got a prosthetic leg. The billboard reads: “Sacha Baron Cohen Walks Away With a Hit…and a touch of stolen valor. Who Is America? Sat, 9pm. CBS.” (“Who is America?” actually airs Sundays at 10 p.m.)

CBS did not immediately respond to TheWrap’s request for comment about the vandalism.

Last Thursday, Cohen tweeted a picture of a typewritten (joke) letter from his new character Dr. Billy Wayne Ruddick Jr.’s account, denying that he duped Palin at all. (The Twitter account is indeed legit and tied directly to Cohen, a person with direct knowledge of the situation told TheWrap.)

“I did NOT say I was a War Vet,” Cohen wrote. “I was in the service – not military, but  United Parcel, and I only fought for my country once – when i shot a Mexican who came onto my property,” he added, further explaining that “(Coincidentaly [sic], just like our Great President, I was sadly prevented from joining the regular army on account of bone spurs bein [sic] discovered in my testies).”

The letter is in reply to Palin’s Facebook message posted last week, in which she stated, “I join a long list of American public personalities who have fallen victim to the evil, exploitive [sic], sick ‘humor’ of the British ‘comedian’ Sacha Baron Cohen, enabled and sponsored by CBS/Showtime.”

She expressed anger over traveling with her daughter to meet a wounded veteran, who was really Baron Cohen in disguise, under the guise of a “legit Showtime historical documentary.”

See the billboard above and exclusive pictures of Sabo constructing it below.

Also Read: Roy Moore Says He Was Duped: 'I Don't Need Sacha Cohen to Tell Me Who America Is' 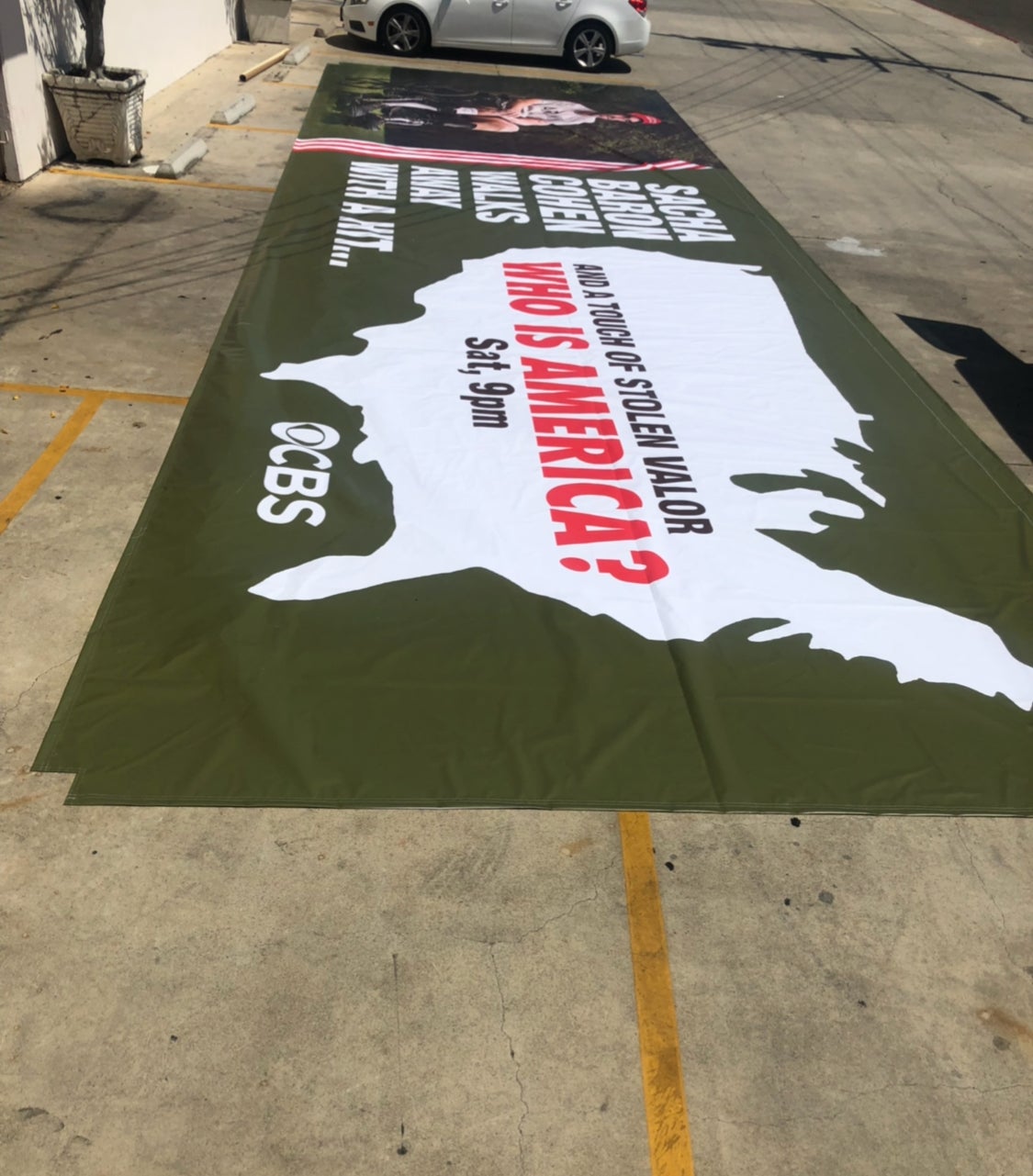 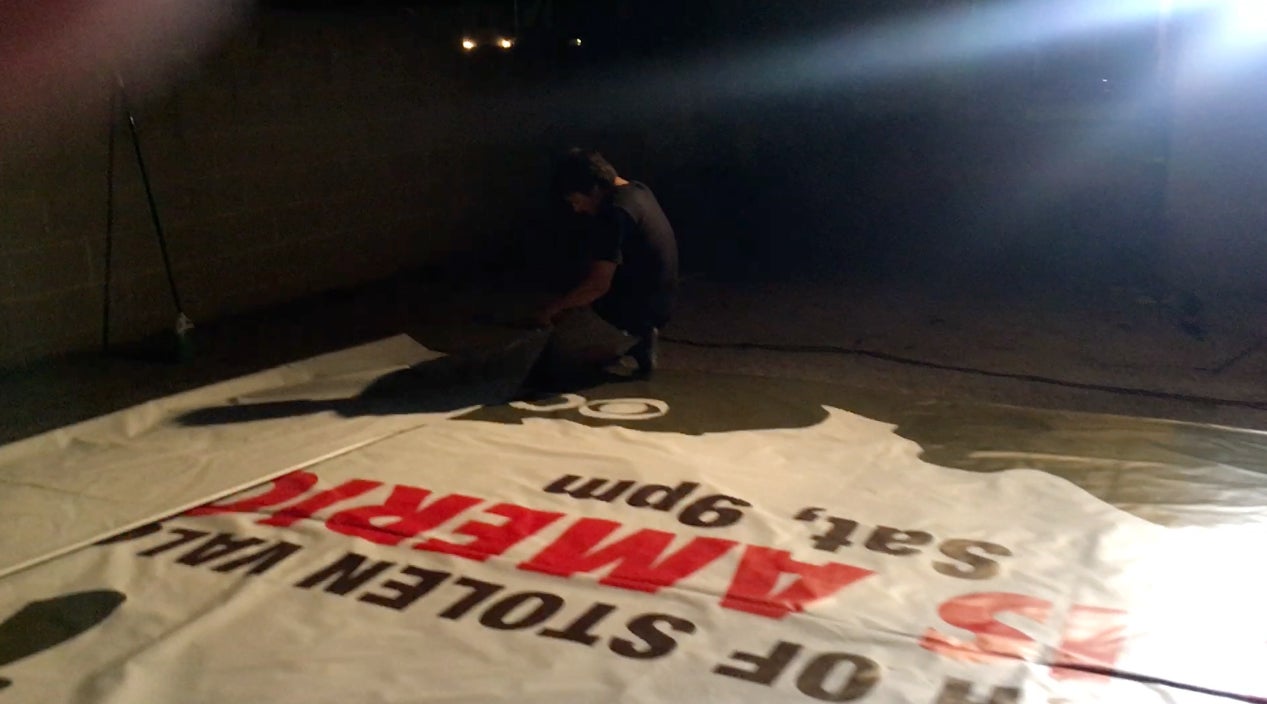 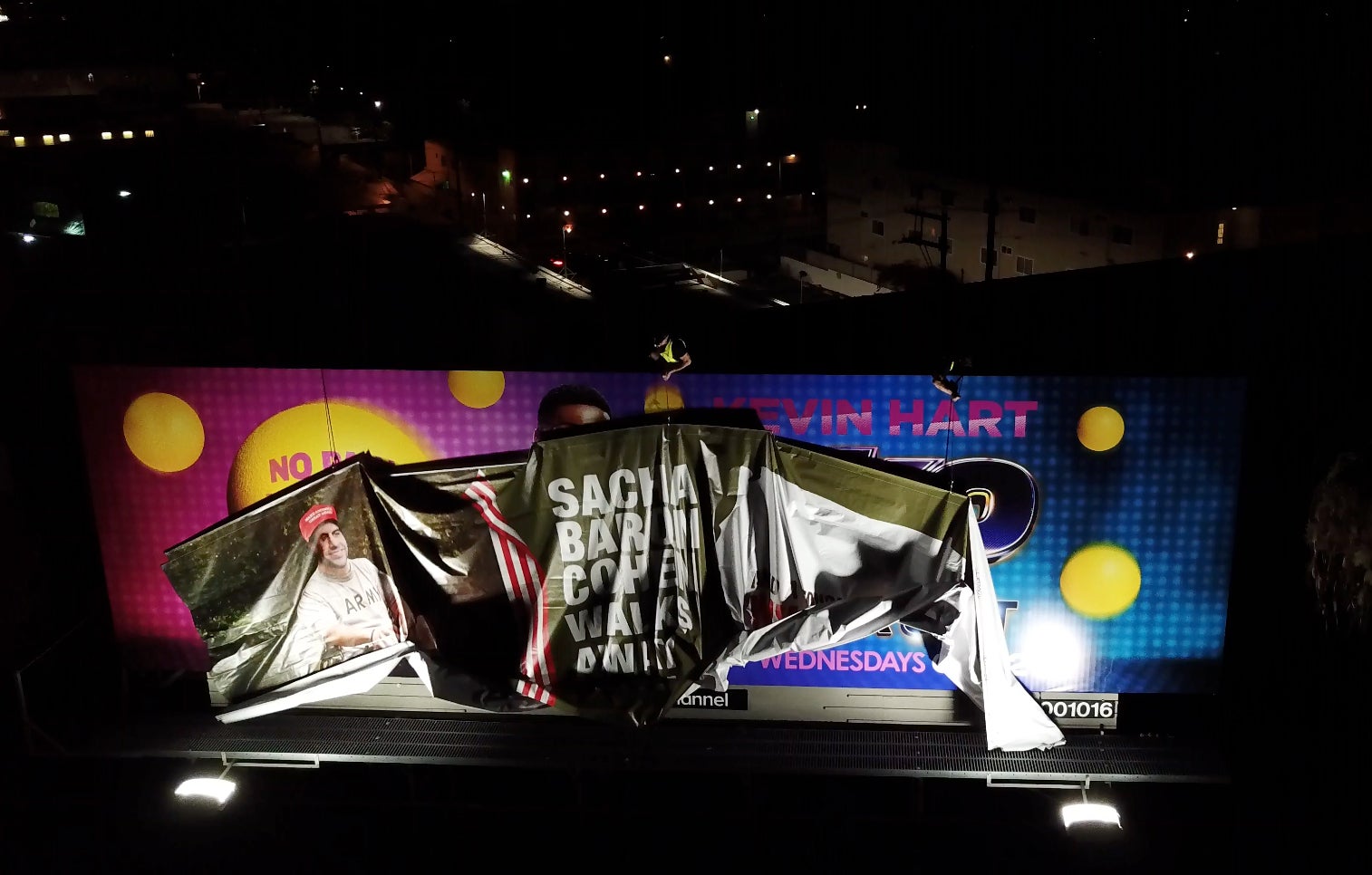 Palin isn’t the only one who has been duped into appearing on Cohen’s show. Bernie Sanders, Ted Koppel, Howard Dean, disgraced Senate candidate Roy Moore, and former Vice President Dick Cheney are all set to appear on the upcoming season. Former congressman Joe Walsh also issued a statement saying that he was tricked into an appearance.

Bruno and Baby O.J.
In "Bruno," Sacha Baron Cohen's Austrian character adopted an African baby and brought him onto a reality show wearing a t-shirt that said "Gayby." Calling him O.J., Bruno revealed he "swapped the baby for a limited edition U2 iPod."
View In Gallery
x
Looks like you're enjoying reading