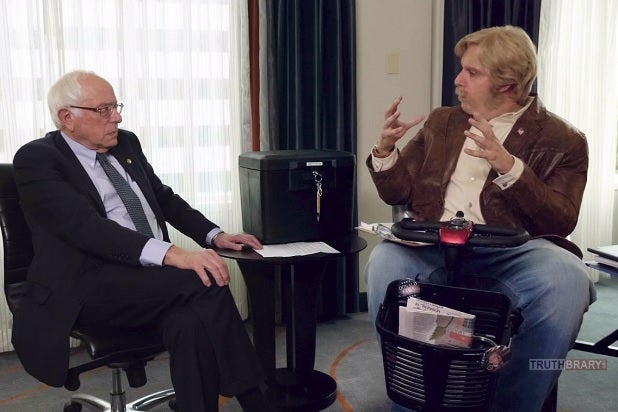 Sacha Baron Cohen’s new Showtime show “Who is America?” only just introduced viewers to the comedian’s new characters, but several of them have been lurking in the background of American life for a while.

In the first episode of his new series on Showtime, Baron Cohen played several different characters to send up the politics of America from a number of angles. There was Dr. Billy Wayne Ruddick Jr., Ph.D., a Southern, right-wing pundit who runs the website Truthbrary.org (as opposed to LIEbrary, as the site was introduced on the show); liberal stereotype Dr. Nira Cain-N’Degeocello; and Israeli gun advocate Erran Morad.

Turns out, their appearances on “Who is America?” weren’t the first time any of those characters had popped up in public. All three have been out in the world of cyberspace, two of which for at least a couple of months at this point, slowly building online personas that are both ridiculous and frighteningly realistic. Ruddick and Cain-N’Degeocello have had Twitter accounts since May (@BillyWRuddick and @drniracain), and Morad has had one, @Erran_Morad, since earlier in July. There’s also Truthbrary.org — which is a real, full-fledged right-wing conspiracy website.

The Ruddick character has gotten the most attention online, following accusations by former Alaska governor and vice presidential candidate Sarah Palin that Baron Cohen had duped her into an interview as the character. Palin said Baron Cohen posed as a wounded veteran, and even accused him of “stolen valor,” or claiming to have served in the military for personal gain.

Baron Cohen responded to Palin in character with a letter from Ruddick, in which he wrote that he never claimed to be a veteran.

“I NEVER said I was a war vet,” the letter, which was posted on Ruddick’s Twitter and on Truthbrary.org. “I was in the service — not military, but United Parcel, and I only fought for my country once — when I shot a Mexican who came onto my property.”

Also Read: Who Is America?': The Best Jokes From the First Episode of Sacha Baron Cohen's New Show

When Baron Cohen played Ruddick in the first episode of “Who is America?”, he did appear on a motorized scooter — but when Vermont Sen. Bernie Sanders, who Ruddick interviewed, asked if he was disabled, Ruddick replied that he wasn’t. He rides the scooter “to conserve my body’s finite energy,” he said.

Before his dust-up with Palin, the Ruddick character popped up irregularly on Twitter. He retweeted a few prominent conservative commentators, like Bill O’Reilly, and shared a few Truthbrary articles, but wasn’t too active, or especially funny. Ruddick mostly comes off as similar to quite a few actual conservatives on the Internet.

Also Read: What Really Is the Point of Sacha Baron Cohen's 'Who Is America?'

Since he’s been outed as the Baron Cohen, though, Ruddick has become more of a right-wing caricature on Twitter.

And of course, there’s Truthbrary.org, which includes articles such as “Hibernating Alien Discovered Inside Secret Chamber In The Great Pyramid,” “Did Barack Obama Campaign Threaten Life of Chelsea Clinton to Keep Parents Silent on Obama’s Ineligibility?” and “21 Goals of the Illuminati and The Committee of 300.”

Dr. Nira Cain-N’Degeocello was Baron Cohen’s character on the other side of stereotypical American politics, an over-the-top liberal who wears NPR t-shirts, bikes everywhere, and forces his children to upend gender norms in their family yurt. Cain-N’Degeocello’s Twitter account is also pretty tame for a comedy character, probably to help keep the lid on “Who Is America?” until is debut on July 15. It mostly retweets left-wing pundits and news stories.

There is an in-character gem among the tweets, though.

So moved to see the world come together for #WorldOtterDay. When Malala and I adopted Lenin and Marx from our local sanctuary, we knew we could provide a wholesome life for these intelligent gender-neutral mammals. pic.twitter.com/6n0zvs5bVU

So while there hasn’t been too much hilarity on the Twitter accounts of Baron Cohen’s characters, they’re out there. If the Billy Ruddick online presence is any indication, it seems likely that, now that “Who Is America?” is out, Baron Cohen’s online personas are about to get a lot more ridiculous.