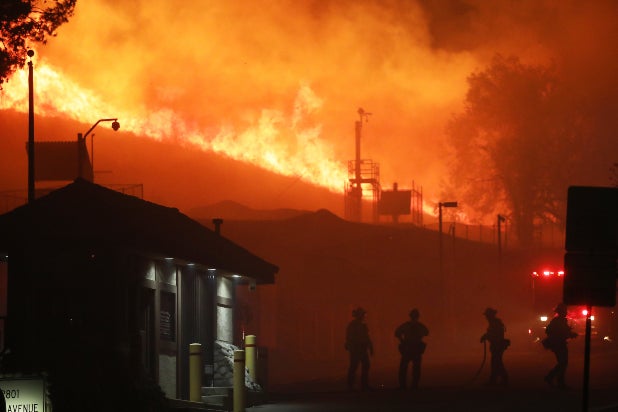 At least seven TV productions were shut down on Friday due to the Saddleridge Fire that is raging through the San Fernando Valley.

ABC’s “Bless This Mess,” which films at the Sable Ranch in Santa Clarita, Calif., also confirmed that production was ceased on Friday.

The fire started Thursday night and has shut down major highways, including the 5 and 118. According to the Los Angeles Fire Department, the fire has burned 7,542 acres with 13% containment (as of 1 p.m. PT) and forced the evacuation of 23,000 homes in the Porter Ranch and Sylmar areas of Northern Los Angeles.

“Perfect Harmony” is one of NBC’s freshman series this season and stars Bradley Whitford. “Good Trouble” is the spinoff of Freeform’s “The Fosters,” while “Party of Five” is a reboot of the old Fox series.

Last November, the Woolsey Fire near Malibu caused massive destruction (it spanned more than 70,000 acres and destroyed nearly 2,000 structures). It burned down Paramount Ranch’s Western Town set in Agoura Hills, Calif., where “Westworld” filmed many of its Main Street scenes, has burned down in the Woolsey wildfire.