Sandra Bullock continued her remarkable move into the awards picture at the Screen Actors Guild Awards on Saturday night, when she took home the award for Female Actor in a Leading Role over early Oscar favorites Meryl Streep and Carey Mulligan. 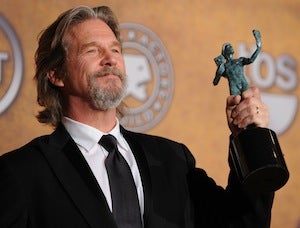 Jeff Bridges won the award for Male Actor in a Leading Role for "Crazy Heart," while the ensemble cast of "Inglourious Basterds" took home the top film awards.

Christoph Waltz and Mo’Nique continued their domination of supporting categories with wins for "Inglourious Basterds" and "Precious," respectively.

It was a night when the SAG voters solidified three Oscar races, and threw the fourth into turmoil.

For Waltz and Mo’Nique, the SAG wins make them both virtual locks to be standing on the stage of the Kodak Theater on Oscar night.

Bridges, meanwhile, continued a run of wins that began last weekend with the Critics Choice Awards and the Golden Globes, making him the clear frontrunner in the Oscar race for his role as a fading country singer. 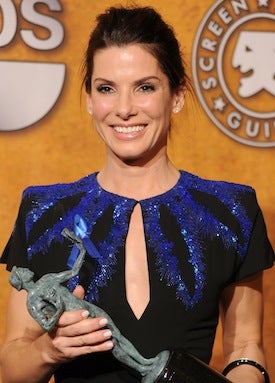 “I love playing with you guys!” enthused Bridges to the room full of actors.

Waltz paid tribute to the many collaborators necessary to put an acting performance on the screen, and thanked “all of you, including the projectionist.”

On her victory for playing a monstrously abusive mother in “Precious,” Mo’Nique said, “It’s exciting, and it says that the message got out, and people heard it and are starting to heal.”

Bullock had clearly become a formidable best-actress competitor in the past month, but her SAG win, coupled with her victory last week at the Golden Globes and her tie with Meryl Streep in the Critics Choice Movie Awards, could make her not only Streep’s most formidable competition in the Best Actress race, but the actual frontrunner.

In the press room, though, Bullock balked at such talk. When a reporter started to tell her she was now the leading Oscar contender, Bullock hissed at him to be quiet, then said she’d made a bet with her limo driver that Streep would win.

“It’s a fluke,” she said of her victory. “I feel it’s wrong, if you really want to know the truth. My money was on Meryl, and I’ll tell her that again and again.”

The ensemble-cast win for “Inglourious Basterds,” on the other hand, is unlikely to have much impact on the Oscar race.  One of the top Oscar contenders, “Avatar,” received no SAG nominations; another, “The Hurt Locker,” did not send out screeners and had a small cast unlikely to attract as much attention as the more commercially successful “Basterds.” A third, "Up in the Air," also failed to receive a SAG ensemble nomination, though it did receive three other acting nominations.

In the television categories, “Glee” and “Mad Men” won the ensemble cast awards for comedy and drama, respectively. Alec Baldwin won his fourth consecutive SAG award for Outstanding Male Performance by an Actor in a Television Series, for “30 Rock.” His co-star, Tina Fey, won the comparable female award.

In the drama series category, Michael C. Hall won for “Dexter” and Julianna Margulies for “The Good Wife.” It was Margulies’ seventh win, the first six of them for “ER.”

Betty White, who was honored with the SAG Life Achievement Award, called it "the highest point of my entire professional life."

Oscar co-host Baldwin was the first winner of the night, and his acceptance speech paid tribute to the guild, which like other Hollywood unions may be entering contract renegotiations next year.