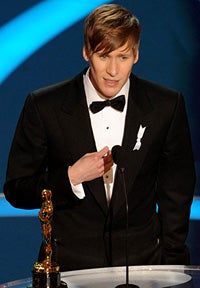 Newsweek’s controversial review of Sean Hayes in a straight, romantic role on Broadway continues to spark an ugly debate, and now the Screen Actors Guild and the Academy Award-winning screenwriter of "Milk" are weighing in.

“Intentional or not, Ramin Setoodeh’s wrongheaded argument sends a damaging and false message that we are limited in the roles we are able to play. This committee was formed to provide support to lesbian, gay, bisexual and transgender actors so that they no longer need to feel as if they must hide who they are in order to work in this business. Unfortunately, harmful attitudes like those of Setoodeh are used to pressure actors to stay in the closet. Our work is clearly not done and we will continue to fight to end fear within the acting community that being open about who you are means the end of your career. I’m an actor; it’s not who I am but what I can play that counts.”

And one from Duncan Crabtree-Ireland, SAG deputy national executive director and general counsel: “Despite the progress made over the years, our LGBT members face discrimination and harassment as do other historically underrepresented groups and SAG will continue to demand that all performers have equal employment opportunities and insist that qualified individuals are hired regardless of how they may identify.”

The SAG action follows actor Kristin Chenoweth’s rant and “Glee” creator Ryan Murphy’s call to boycott the magazine, and comes the same day as Newsweek tried to calm the waters in an interview with GLAAD president Jarrett Barrios and Dustin Lance Black, Academy Award-winning screenwriter of “Milk” – an effort by the magazine to get in front of the story.

Not entirely sure it worked:

Marc Peyser, Newsweek Culture Editor: Obviously the piece that we’re all hearing about has touched quite a nerve out in the larger world. My hope is more to sort of move beyond that, and talk about what life is really like in Hollywood for gay people—actors, obviously, but also screenwriters, if you will, and directors. It’s my sense that one of the reasons people are upset about the piece is that—there’s lot of reasons—but one is that we assert that gay people don’t get to do the same kinds of things that straight people do. And I think that that’s an unpleasant thing to be confronted with. Do you have a sense, Lance, that that’s true? Do you think being gay in Hollywood puts no limits on you?

Dustin Lance Black: Just stepping back a second, that wasn’t really what I got from the article. I wish that’s what the article was about. To me, the article seemed to be attacking gay and lesbian people’s ability to—talent to—take on heterosexual roles.

Meanwhile, the Hollywood Reporter ran a pair of op-eds on Thursday about the controversy — one by Black and Barrios:

"With the stakes so high for gay Americans at this moment, it is no excuse for his editors inflicting such hurtful — and baseless — musings on the readers of Newsweek. We’d all have been better off leaving Setoodeh’s tortured thoughts on his therapist’s couch and leaving baseless stories like this one on the editor’s desk."

The other, by THR.com editor Andrew Wallenstein, defended Newsweek.