There’s no avoiding the on-air layoffs that recently rocked ESPN. But amid the turmoil and media speculation, there are plenty of positive changes happening at the sports giant.

Among them is Sage Steele returning to her roots on “SportsCenter” at the network’s hub in Bristol, Connecticut.

“There’s been a lot of changes at our network, and frankly I am happy to be part of them,” Steele told TheWrap. “None of the wonderful things in my career would have happened if not for starting in Bristol. … I am just pumped.” 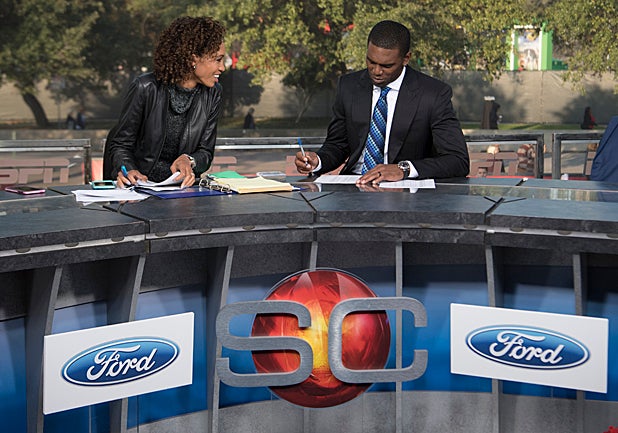 Steele will also continue her “SportsCenter on the Road” gig, which took her to far-flung locations such as Mexico City last November for the international NFL game, Houston for Super Bowl LI (above), Augusta for The Masters … and currently back to the Bay Area and Cleveland for the NBA finals (again).

Steele, who made her ESPN debut in March 20007, acknowledged the troubles her company and many of her now-former colleagues have faced. Her new deal “has been in the works for a few months,” Steele said, but “there was a lot that the network has needed to work out” before it could be announced.

Steele said she’s been away from Bristol so long that “I can’t answer how the vibe is” since the axing in April of 100-plus staffers, including John Clayton. “I am a little nervous to go back for that reason because I have a lot of friends who are no longer there,” she said. “I almost a little guilty for not having felt what it was like there.  … I just want to go and kick butt.”

Steele commended how many of the remaining hosts handled the difficult situation. “I was very moved by how everyone handled it when it was taking place around them,” Steele explained. “Every corporation in America has been through this — the difference is that we are in the spotlight because of what we do. For most people when this happens, the rest of the world is not talking about it.

“It was really difficult to watch from afar and keep all of those friends of mine in my thoughts, so you do get survivor’s guilt,” she told TheWrap. 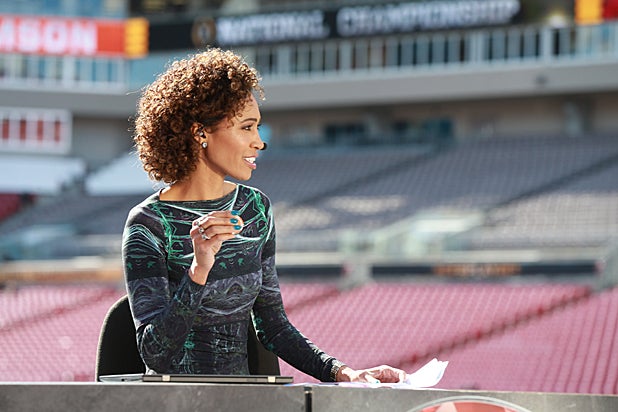 Steele is now heading back to the hosting chair on “SportsCenter” (mornings from 7-11 a.m. ET) alongside fan favorites Kenny Mayne, Steve Levy, John Anderson and John Buccigross, plus Neil Everett and Stan Verrett from Los Angeles.

Along with her resumed role on the flagship show, Steele is most delighted that Mayne is back on the main roster. “Kenny is just hysterical and so smart. He is one of the people who made me want to be on ‘SportsCenter,'” she said.

The show will return in August with a slightly different format. “Everywhere I go, people say they want more highlights,” she said.

“Sometimes I feel like a kid again as I am still able to have my dream job, but just in a different capacity,” said Steele, who is excited to be back out in the trenches bringing the energy from the fans to the viewers. “I thrive on location, I love those on-site live broadcasts where anything can happen.”

“I just celebrated my 10-year anniversary at ESPN, I can’t believe it has been a decade,” Steele said. “It took me my whole life to get here, so now to open this chapter … I have a cheesy grin on my face.”