It’s go day for the Screen Actors Guild. After almost a year of controversies, drama, internecene fighting and a de facto strike, the end of the rollercoaster ride could come as early as Tuesday night if the guild’s newly reconfigured task force agrees to a deal with the AMPTP.

Well, over for now. (Update: After a day of meetings on Tuesday, the negotiators adjourned to continue their talks on Wednesday.)

SAG stands at a crossroads. The new guild negotiators – led by interim national executive director David White and chief negotiator John McGuire — may well take the deal offered by the studios for $250 million.

If they do, it will be only a tepid victory at best. And probably a temporary one.
For it has been decades since the guild has been able to flex its muscles as a potent force. Instead the studios and world have watched Hollywood’s largest union fracture from within, and become an essentially diminishing protector of its rank-and-file membership. 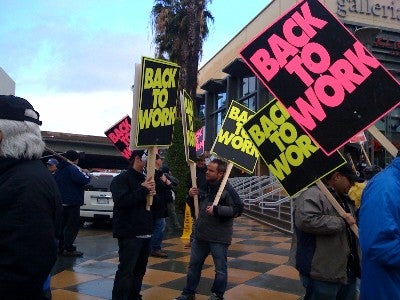 Can SAG get it together? To some, the question is a larger one about the future of unions in this country in the 21st century.

In a world where the foundation of organized labor – domestic manufacturing – has disappeared, and where the guilds in the entertainment industry have been in slow retreat for decades, it seems fair to question if there are alternatives to the current spectacle of internal fighting ending in studio givebacks.

As labor unions retreat, workers on the lower rungs of the labor force are beginning to experiment with other ways of organizing.

One alternative is something called a “workers center.”  They act as pressure groups on employers but do not conduct collective bargaining. The National Day Laborers network, and the Restaurant Opportunity Center in New York have such “centers,” as do car wash workers in Los Angeles.

Actors may not relish going this route. But it’s been a long time since “Norma Rae,” and union membership in America has been in decline for decades.

The U.S. Department of Labor’s Bureau of Labor Statistics recently reported that 12.4% of employed wage and salary workers were union members in 2008, a slight increase from 12.1% in 2007. The number of workers belonging to a union rose by 428,000 to 16.1 million.

In the 1950s, one in three American workers were union members.

(Incidentally, Norma Rae herself – Sally Field – has been outspoken against a SAG strike.)

Chris Tilly, director of UCLA’s Institute for Research on Labor and Employment and Professor in the Urban Planning Department, said years of intimidation by corporations have discouraged workers from organizing.

“The laws are designed to protect workers’ rights to form unions, but they don’t do a very good job of it. It’s not hard for employers to derail a union campaign,” Tilly said. “It’s not legal for employers to fire workers, but they do it and the penalties are very small…. It’s about one in 50 who supports a union, gets fired. That’s not terrific odds.”

If President Obama and his newly appointed Labor Secretary Hilda Solis have their way, it will be easier for workers to unionize or to join existing unions under the Employee Free Choice Act — commonly referred to as the Card Check bill. The bill, currently waiting to be reintroduced into to Congress, would also increase the penalties for unions that violate the laws.

But Richard Epstein, professor of law and director of the Law and Economics Program at the University of Chicago, has called the bill “unconstitutional” and “a job killer of the first magnitude” in columns for the Wall Street Journal and Forbes. (See Q&A with Epstein.)

“Obama would be crazy to push this now,” he told TheWrap. “Nobody believes in it, which unfortunately he does. So much resentment will basically guarantee a completely polarized administration if he tries to ram it down their throats.”

While Washington pundits argue over how and whether to breed more unions, thousands of working actors across the country are laboring under the weight of paying multiple guild dues.

LA-based actress Kimberly Dilts estimates she has spent $5,000 joining SAG, AFTRA and Actors Equity, yet she still does not qualify to receive health insurance from any of them.

“It’s a mess; there isn’t an alternative,” Dilts said. “But if you want to make a living, you have to do it. The system will never be perfect because there will always be more actors than there are jobs.”

Dilts agrees with the guild’s president Alan Rosenberg that the AMPTP’s “final offer” is unacceptable, but wonders what the leaders of her union do at this point.

“We’ve proven ourselves to be powerless and a strike is not the solution,” she said. “We’re not going to get what we want this time around. We have to immediately plan for the next three years.”

With the hardline factions of SAG eclipsed, many labor observers say that a merger among the three unions is inevitable.

“I’ve always said that it makes no sense for actors to have to pay union dues to more than one union in order to make a living,” said Stephen Diamond, an associate professor of labor law at the Santa Clara University School of Law and a former candidate to be SAG’s executive director.

“It’s incumbent on the union leadership—both elected and staff—to think about this from the point of view of how to effectively nurture the careers of their members and how to defend their interests.” Diamond noted that members pay $1.5 million dollars, total, for their national executive directors. If the unions merged, he said, it would save money.

But a merger is easier said than done. There have been 16 failed attempts to merge SAG and AFTRA.

Rosenberg’s party Membership First are adamant about keeping the guild intact. And their faction blame AFTRA for creating animosity.

In September, SAG vice president Anne-Marie Johnson, with the hardline Membership First faction, wrote in Back Stage, “Membership First sees no benefit in merging with a union with such opposing ideals, ideals that have damaged the financial security of dual cardholders…”

She added, “Merging with AFTRA would certainly not give SAG leverage. It has done the opposite…. We want all actors under one roof, but we don’t want to merge with another union that represents non-actors.”