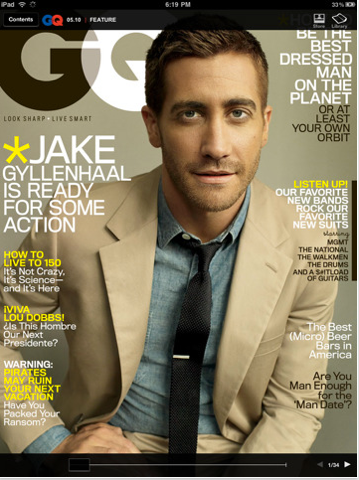 GQ was one of the first magazines to produce a version for Apple’s iPad.

Like most publishers, Condé Nast has been largely mum on how well those versions are selling. But some numbers trickled out today – and they don’t sound terribly impressive.

GQ VP and publisher Pete Hunsinger told Min that it sold 365 “copies” of its December issue on the iPad – essentially digital copies of a back issue at $2.99 a pop (or roughly $1,091.35 in extra revenue).

According to a spokesperson for the magazine, the 365 figure reflects sales in March and April alone.

“This costs us nothing extra: no printing or postage,” says Hunsinger. “Everything is profit, and I look forward to the time when iPad issue sales become a major component to our circulation.”

For a magazine that sells about 200,000 copies per issue at the newsstand, Hunsinger could be looking forward a long time. But, again, that’s a back issue. As Mashable notes, GQ’s May 2010 issue for the iPhone and iPod touch is the best-selling in the iTunes store “suggesting that the magazine is developing a solid base of repeat buyers.”

That month Peter Kafka crunched the numbers: “At $2.99 a pop, and after subtracting Apple’s 30 percent fee, that’s about $39,000 in revenue for the publisher, which isn’t even enough to rehire anyone the company let go during last fall’s layoffs.”

In other words: not great, not terrible. A decent start.

In terms of print advertising, things are (thankfully) looking brighter for GQ, with its June issue up 40 percent over last year’s brutal performance.