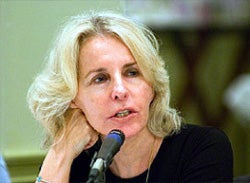 The Washington Post is not commenting on a report by outgoing Washington City Paper columnist Eric Wemple that it is killing a column by socialite-ning-rod Sally Quinn after the D.C. doyenne used it to combat rumors about a wedding in her family.

The Post debuted Quinn’s column — called “The Party,” with the tagline “on entertaining and how to do it” — late last year.

The blogosphere, meanwhile, had a field day with her apparent familial overshare.

Wonkette: "BREAKING: Wacky old Sally Quinn has two weddings to attend on the same day, due to an inadvertent scheduling problem, and may only be able to attend one."

The Awl: "It is hard to know where to begin with this Quinn piece, but one way to begin is to pull back and take the wide-angle view, which is that she believes she has been given a column in the Washington Post Style section to deal with her personal business."

According to Wemple, a newsroom source at the Washington Post said “the column’s “survival … has been the topic of several high-level discussions at the paper this week."