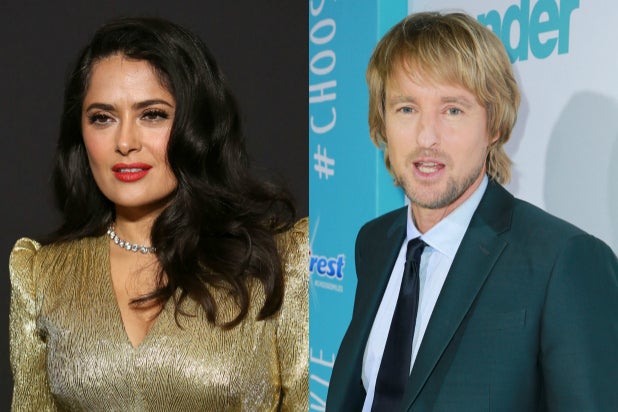 Academy Award-nominees Salma Hayek and Owen Wilson are coming together for a mind-bending love story in “Bliss” from Amazon Studios.

The sci-fi drama was written — and will be directed — by Mike Cahill. Cahill was nominated for two Independent Spirit Award’s for best first feature film and best screenplay for his film “Another Earth,” which he wrote with Brit Marling (“The OA”).

“Bliss” follows recently divorced Greg (Wilson), whose life is falling apart when he meets the enchanting Isabel (Hayek), a woman who lives on the streets and is convinced that the polluted, broken world around them is not real. Isabel believes they are living in an ugly, harsh world simulation inside of the beautiful, peaceful “real” world of bliss. Doubtful at first, Greg eventually discovers there may be some truth to Isabel’s wild conspiracy theory.

“Mike Cahill is a brilliant storyteller gifted by a unique ability to craft the truly high-concept idea in a deeply soulful way that resonates with audiences,” Amazon’s co-head of movies Ted Hope said in a statement. “As a real fan of all his work, I am delighted that we can provide this opportunity for him to take his vision further than ever before. We know our global customers will be excited to see what Mike and his team — Salma Hayek, Owen Wilson, and this fabulous cast and crew — can do with such complex, yet real characters in such an imaginative and thrilling world. It will blow people’s minds, I am sure.”

Both Cahill’s “Another Earth” and his other most well known film “I Origins,” which were released by Fox Searchlight, won the Alfred P. Sloan Prize at the Sundance Film Festival where they premiered. Cahill also directed the pilots of “The Magicians,” “The Path” and “Rise.”

“Working with this brilliant cast is a dream come true. Working with my dear friend and producer extraordinaire Jim Stern is a gift. And we couldn’t be more thrilled to be making this with Amazon Studios,” Cahill said in a statement. “As the industry continues to evolve, Amazon proves to be taking the most exciting risks on films with ambitious artistic goals that also aim to reach wide audiences. I feel so grateful to have our film Bliss included among their next round of groundbreaking works.”

Stern is a long-time entertainment producer and director, produced more than 30 films, over 20 Broadway shows, and various other entertainment properties. In 2002, Stern founded Endgame Entertainment. His most recent productions include Netflix’s “Murder Mystery,” starring Adam Sandler and Jennifer Aniston, and Fox Searchlight’s “The Old Man and the Gun,” directed by David Lowery starring Robert Redford, Sissy Spacek and Casey Affleck.

“It is an incredible opportunity to be working with a visionary like Mike Cahill,” Stern said in a statement. “We pride ourselves at Endgame on working with filmmakers with a passion for storytelling and connecting with global audiences, and are looking forward to sharing Bliss with the world.”

Hayek will next star alongside Tiffany Haddish and Rose Byrne in Paramount’s comedy “Limited Partners,” which the studio plans to release in January 2020. She was most recently seen in “The Hummingbird Project” with Jesse Eisenberg and Alexander Skarsgård, as well as in the critically-acclaimed “Beatriz at Dinner,” in which she starred as the title character for director Miguel Arteta and writer Mike White.

Hayek recently wrapped production on the HanWay/Bleeker Street Untitled Sally Potter drama with Javier Bardem and Elle Fanning, and Lionsgate’s “The Hitman’s Wife’s Bodyguard” where she reprises her role as Sonia Kincaid opposite Samuel L. Jackson and Ryan Reynolds.

Cahill is repped by WME and Sloane, Offer, Weber & Dern, Hayek is represented by CAA, Evelyn O’Neill at Management 360 and attorney Bill Sobel at Laird & Sobel, and Wilson is repped by UTA.