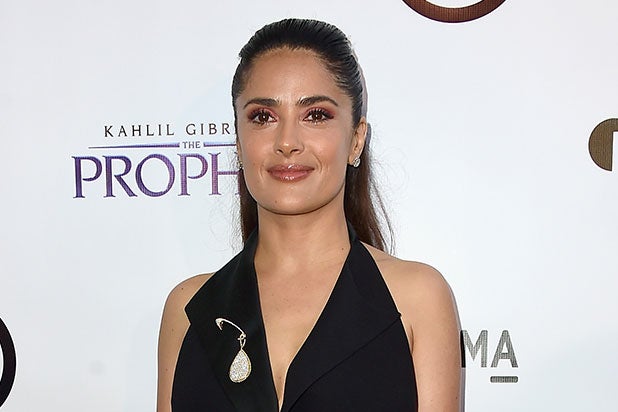 Salma Hayek, who was born in Mexico but moved to Los Angeles in 1991, isn’t going to let Donald Trump‘s controversial remarks about immigrants put her down.

In an interview with the Los Angeles Times on Friday, the “Frida” actress opened up on her thoughts about Trump’s comments, saying that “it’s a very simple tactic for self-promotion. What’s sad is how easily people are manipulated. I’m not insulted because I cannot be insulted by stupidity.”

Moreover, Hayek says she will not easily be manipulated by uninformed people.

“Everybody’s entitled to have uninformed opinions,” she told the Times. “Everybody’s entitled to be dumb. But I’m not dumb, so I see through the manipulation. We have something to learn from this. That is that the educated people or the people with great human values have to wake up, because they are under the illusion that most of this country is like them and sometimes they don’t even go to vote.”

Hayek has been an outspoken political activist for years now — in 2005, she testified before the U.S. Senate Committee on the Judiciary supporting reauthorizing the Violence Against Women Act. In 2006, she donated over $75,000 for battered women shelters and anti-domestic violence groups in Mexico. She has also spoken out about discrimination against immigrants.

“I’m advocating just to say that we can be better than we are,” Hayek continued. “Life is exhausting. Sometimes we fall into the river of life and it just takes us, and we don’t get to look around or swim or stop to drink it. By the time we realize it, we got to the end of it and it’s over. We should take control over it.”

Last month during his presidential announcement speech, Trump called undocumented Mexican immigrants “rapists” and “criminals,” among other pejoratives. Since the remarks, a host of companies, including Univision, NBC and Macy’s, have severed ties with the mogul/politician.

In the same interview with the Times, Hayek also talked about how various women in Hollywood have started to speak out about gender issues. TheWrap recently spoke to Helen Mirren and Maggie Gyllenhaal about this particular issue. However, Hayek has been advocating for equal gender roles for over 30 years, she said.

“That’s wonderful. That means there’s been an evolution,” she said. “I’m very hopeful that it’s gonna change really fast, not because Hollywood cares about women but because we represent economically something that they need and that they neglected. Now they’re in trouble because they don’t even know what we want to see. I ask you, what is the type of movie that’s mainstream for men?”