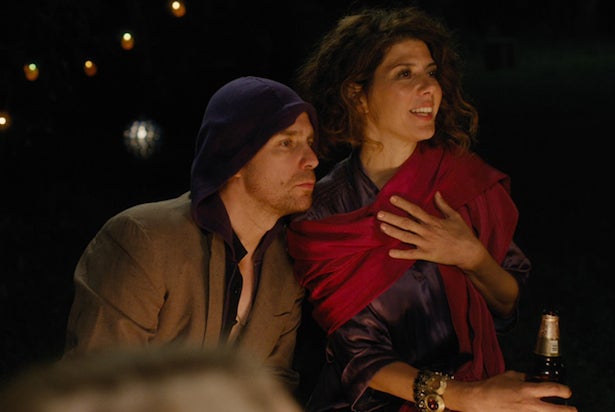 Michael Godere (“The Affair”) and Ivan Martin (“Hollywood Ending”) star in the movie, which portrays the trials and tribulations of two down and out actors in New York.

“Loitering With Intent” premiered at the Tribeca Film Festival and co-stars Brian Geraghty (“The Hurt Locker”) and Isabelle McNally (“House of Cards”).

Godere and Martin also co-wrote the movie, having previously teamed on the indie thriller “Daylight.” For their sophomore outing, the writers reached out to fellow New York actors to support the on-screen depiction of their career realities.

Story follows two struggling actors (Martin and Godere) who retreat to the country to write a screenplay that will salvage their downward-spiraling careers. The solitude they seek in upstate New York is quickly interrupted by their host’s (Tomei) romantic involvements, as well as other hilarious antics from unexpected guests.

“The heart of this film is about friendship. Michael and Ivan created great characters and a great atmosphere to work in. We had a ball bringing this world to life,” said Tomei, who also produced the film.

“It’s a true pleasure to get the opportunity to work with Marisa, Sam, Adam Rapp and the whole talented team responsible for Loitering With Intent,” said Paul Davidson, The Orchard’s senior VP of film and TV. “It’s a unique gem with moments of genuine hilarity that we’re excited to share with audiences.”

The deal was negotiated by Danielle DiGiacomo of The Orchard with Marc Bortz and Kevin Iwashina of Preferred Content and André Des Rochers of Gray Krauss Stratford Sandler Des Rochers on behalf of the filmmakers.

The Orchard recently released the Sundance-winning documentary “Rich Hill” and the horror movie “The Canal,” which also screened at the Tribeca Film Festival.