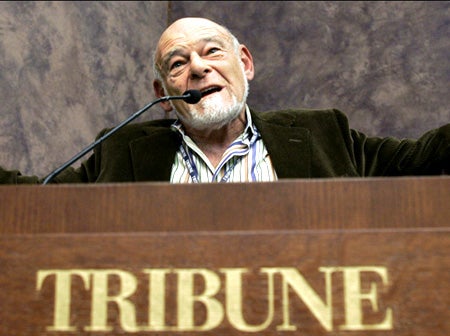 Sam Zell, who engineered a daring, $8.7 billion buyout of the Tribune Company in 2007 only to see it fall into bankruptcy a year later, abruptly resigned as its CEO on Wednesday.

Randy Michaels, formerly the head of the company’s interactive and broadcast divisions and who has served as its chief operating officer since May, will succeed Zell as its chief executive; Zell will retain the title of chairman.

“At this point in Tribune’s evolution, no one is better suited to lead the company forward,” Zell said in a statement.

Zell’s resignation comes a year after the company – crippled by some $13 billion of debt – filed for bankruptcy protection. The news also comes a day after the company won more time to broker a deal on a Chapter 11 exit plan, according to the Wall Street Journal.

Tribune, the owner of the Chicago Tribune, Los Angeles Times, WGN television and other newspapers and media properties, had recently sold its controlling stake in the Chicago Cubs baseball franchise.

“There is a lot of work yet to do, but we have tremendously talented people and world-class brands in print, on air and online," Michaels said in his own statement. "Our businesses are profitable and we’re gaining market-share and momentum in a tough environment."

The Tribune’s creditors, however, will have the final say on the management structure as the company emerges from Chapter 11. And according to an unnamed Chicago Tribune source, it’s unclear as to how — or even if — Michaels and Zell fit into those plans.