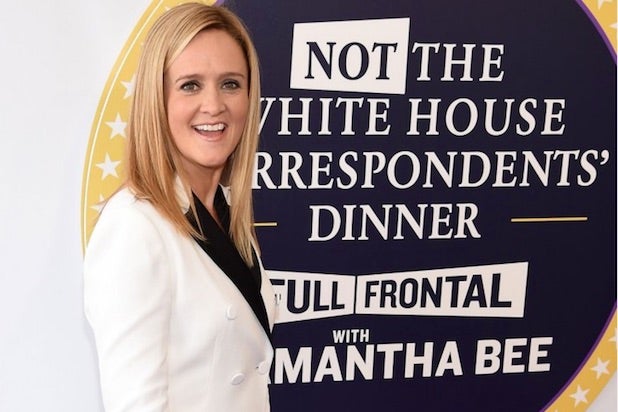 Samantha Bee has become the queen of stinging the Trump administration, and she pulled out her sharpest one-liners yet to give it to the “thin-skinned” POTUS while offering the “fake media” a big warm bear hug at her “Not the White House Correspondents Dinner” Saturday.

The “Full Frontal” host held her own dinner at DAR Constitution Hall in Washington, D.C. the same night as the annual “nerd prom,” and let her disdain for Trump fly. In a pre-taped segment viewed by an audience of roughly 2500, Allison Janney reprised her “The West Wing” role of press secretary C.J. Cregg… but with a touch of Melissa-McCarthy-as-Sean-Spicer-esque humor. Meaning, “Cregg” took out a reporter with laser vision.

When Bee joined the party, she treated the press with kid gloves, telling them, “At a later date, I will get Mexico to pay for your drinks,” and praising them all “for continuing to fact check the President as if one day he might be embarrassed.”

Bee told The Daily Beast that she and “Full Frontal” showrunner Jo Miller cooked up her event because they never thought the real White House Correspondence Dinner was going to happen, considering the president’s testy relationship with the media.

“He doesn’t need a reason to do or not do anything. He doesn’t seem to do things with any rhyme or reason,” Bee told The Daily Beast. “I assume he wouldn’t want to walk into a room where people were apt to criticize him because he’s awfully thin-skinned. So it makes complete sense to me that he would not go.”

As one of the comedy world’s strongest critics of the POTUS, Bee joked that she tries to keep her “outrage at Defcon 1” when it comes to the doings and un-doings of the Trump Administration. Her one goal for the #NotTheWHCD: “We’re just trying to find any sliver of joy in our lives.”

“Not the White House Correspondents Dinner” airs Sunday at 10 p.m. ET on TBS.