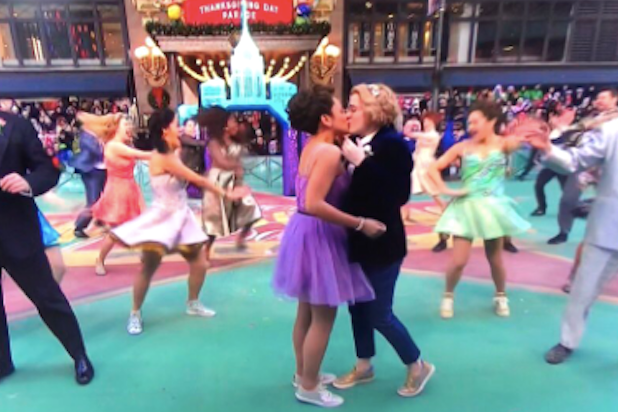 Alyssa Milano is pushing back against irritated conservatives complaining about the first-ever same-sex kiss at the Macy’s Thanksgiving Day Parade on Thursday.

The actress and activist retweeted a post from For America — a group that describes itself as the “new champion of conservatism” on its website — saying millions of kids “had their innocence broken” after seeing two young actresses kiss during one of the parade’s musical numbers. Milano didn’t see it that way.

My small children’s innocence was broken by active shooting drills in school.

The parade featured a performance from the Broadway musical “The Prom.” Isabelle McCalla and Caitlin Kinnumen, two actresses from the show, shared a kiss towards the end of the number. You can see the moment for yourself at about the 3:15 mark in the video below:

The moment divided many along political lines. Fox News host Todd Starnes wrote the parade was once a “family-friendly affair” that was now pushing a “specific agenda.” Christian pundit Linda Harvey called the kiss an “offense,” before adding “this corruption is deliberate as the procession toward normalizing decadence marches on.” One Twitter user said the “absolutely ridiculous” kiss meant she’ll now be boycotting Macy’s altogether.

And there were plenty of people that sided with Milano.

History (or rather, HERstory) has just been made! Bravo to #TheProm!!! (Credit to Hector Lugo for the herstory term!) https://t.co/DynR4OiESe

I saw this moment and beamed, thinking of all of the kids watching and how momentous and sweet this kiss was. Sad and mad to realize that many were offended and are condemning NBC and Macy’s for airing it. Please let NBC and Macy’s know love is love, hate is hate. https://t.co/XxWdyfG4U2

“The Prom” actor Josh Lamon tweeted on Thursday the cast has “never been so proud.”

The first #LGBTQ kiss in the Parade’s history. We here at @ThePromMusical have never been so proud. #LoveIsLove

“Broadway’s ‘The Prom’ is grateful to Macy’s and NBC for their acceptance and inclusivity of a community and a story that is about acceptance, tolerance and love,”  Bill Damaschke, Dori Berinstein and Jack Lane, the musical’s producers,  told EW in a statement on Thursday. “These are some of the themes reflected in our musical comedy and we are very proud to be the very first LGBTQ kiss on the Thanksgiving Day Parade.”