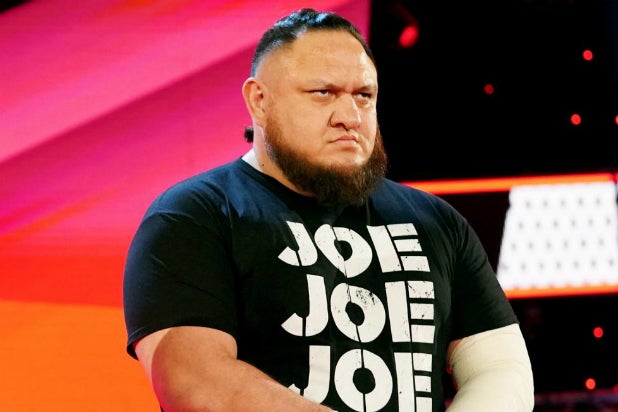 WWE has suspended “Raw” Superstar Samoa Joe for 30 days following a first violation of the company’s wellness policy, which covers testing for performance-enhancing and recreational drugs.

His suspension went into effect yesterday.

“WWE has suspended Nuufolau Seanoa (Samoa Joe) for 30 days effective Monday, February 24, for his first violation of the company’s talent wellness policy,” the company said in a statement Tuesday.

Joe, who did not appear on Monday’s “Raw,” has been dealing with concussions recently and sustained a head injury while performing a stunt during the filming of a commercial for WWE two weeks ago, an individual with knowledge tells TheWrap.

The “Raw” Superstar has been part of the ongoing Seth Rollins-Kevin Owens feud, siding with Owens. His suspension will end March 24, just under two weeks out from WrestleMania 36, where he and Owens appeared destined to compete in a Raw Tag Team title match against Rollins and Buddy Murphy, the current champions.

WrestleMania 36 will be held at Raymond James Stadium in Tampa, Fla. on April 5.

Also Read: Bella Twins Nikki and Brie to Be Inducted to WWE Hall of Fame

A world-traveled veteran of the mat game, the 282-pound Samoa Joe has used a blistering, MMA-inspired offense to rack up championships in top promotions across the globe. Before he ever set foot in WWE, Samoa Joe had already thrown down with the likes of John Cena, Daniel Bryan, Seth Rollins and Cesaro throughout his storied career.

Still, despite his pedigree, the thought of Samoa Joe entering a WWE ring seemed to be relegated to the imaginations of fantasy matchmakers worldwide. Yet, after barreling through WWE NXT and twice capturing the NXT Title, Joe officially signed to Monday Night Raw in 2017 and has since unleashed his vicious squared circle philosophy on Raw and SmackDown LIVE against opponents like AJ Styles, Roman Reigns, and even Brock Lesnar.

Samoa Joe’s path of destruction continues to grow with every beating that he executes, and his roughneck style has earned him multiple United States Championships. Still, whether Joe is carrying a title or not, he’s always one of the most dangerous threats to anyone in WWE.