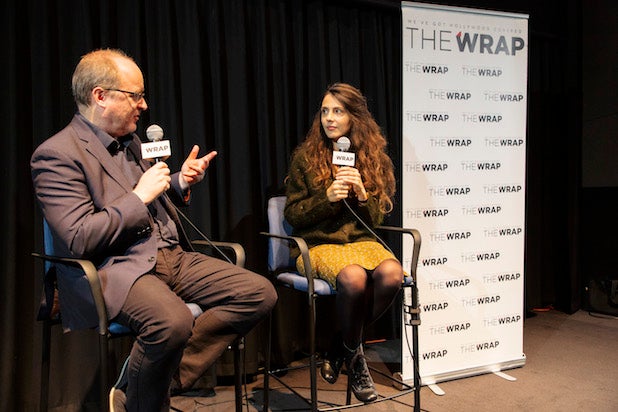 With nearly 130 hours of documentary footage and 18,000 drawings, ‘Samouni Road’ depicts the lasting impacts of the Gaza conflict.

The Italian documentary, directed by Stefano Savona, follows the loss, trauma and violence a Palestinian family experienced following the 2009 Israeli operation Cast Lead. The operation resulted in thousands of deaths and the total destruction of homes and landscapes in the Gaza strip.

“Gazans live in a difficult situation. They not only have 2-million people in a small land…but they are also under political pressure,” writer Penelope Bortoluzzi told TheWrap’s Steve Pond. After a screening of the film, Bortoluzzi also discussed the movie’s animated moments, impartial storytelling and more at Landmark Theatres in Los Angeles.

Savona, Bortoluzzi said, initially conceived the idea to follow the Samouni family after he met them when they were returning to their homes while he was filming a documentary in Gaza during the operation. Despite finishing his other doc, Bortoluzzi said the director decided to stay another month and create another film depicting the aftermath of the violent attacks.

“(Savona) was shocked by the story of the Samouni family,” she said. “He decided that they deserve to be more than martyrs and…victims. He wanted to tell the story from the beginning and share the past, present and future of this family.”

Since 2009, Savona and the “Samouni Road” film crew captured more than 100 hours of documentary footage of families reconstructing their lives and recounting their experiences of the traumatic attack. From there, Bortoluzzi said she and Savona created a film narrative based on the families’ accounts. Though video footage depicts the present and future of the Samouni family, black-and-white sketch animations recount the moments leading to the first attacks by Israeli forces.

Bortoluzzi explained that animations, as opposed to reenactments, provided a sense of reality that best suited the tone of the film. She said that the animation also added a dream-like aspect to the past, as they allowed Savano to bring the family’s first-hand experiences with operation Cast Lead to the screen.

Additionally, Bortoluzzi said she and other memebers of the “Samouni Road” crew were cautious about the film being read as politically charged or impartial.

“When we were writing the script…we always explained that we were telling the story of this family,” she said. “We wanted to tell how diverse the society (in Gaza) is.”

Bortolozzi also told TheWrap that though the Samouni family has seen excerpts of the film and parts of the animated sequences, they still have yet to see the full movie. She said that the families living in the small Gazan town have access to a daily total of three hours of electricity, making it difficult to screen the entire film. Though the movie has yet to premiere in its subject location, “Samouni Road” has been shown in Jerusalem and at the Cannes Film Festival earlier this year.

“Cannes means that more people can see the film,” she said. “In a way Cannes is a good way to start.”