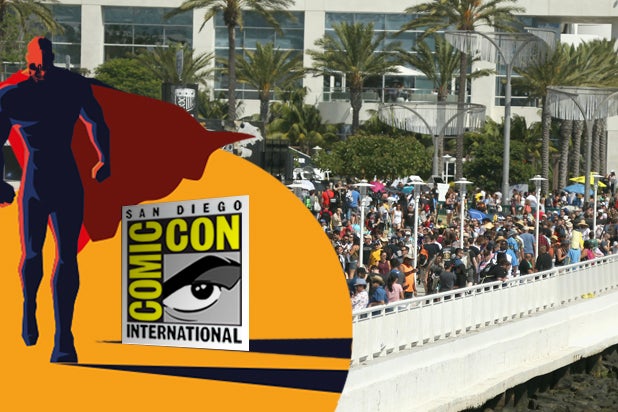 Today should have been the first day of San Diego Comic Con 2020, the 51st installment of the crown jewel of nerd conventions, with over 100,000 fans from around the world converging on “America’s finest city” for a week of partying, movie and TV news, and yes, comics.

Unfortunately, COVID-19 had other plans.

Thanks to the pandemic that has killed more than 140,000 Americans and is still forcing shutdowns across the country, SDCC 2020 has been replaced with a virtual edition called Comic-Con@Home. As a result, there will be no Marvel, DC Comics or for that matter any Hall H panels, no Artists Alley, no convention floor to walk around, and definitely no cosplayers (despite the uptick in masks we’re all seeing).

It’s not just fans, of course. The other side of the big events in Hall H and Ballroom 20 is that they are the place many studios, networks and streamers kick off the promotional arm of an upcoming tentpole movie or genre TV show. “A significant marker for our industry in launching tentpole films and genre television has been erased this year,” one film producer told TheWrap. “It’s a big void which will be felt throughout the industry. It’s unfortunate that due to the current climate, tens of thousands of fanboys and fangirls are unable to congregate in San Diego and celebrate their camaraderie, which emanates from their unified love of comic books science fiction and pop culture in general.”

But Comic-Con is about more than just those big Hall H/Ballroom 20 movie and TV events, of course. It’s seeing writers and artists lay everything bare in smaller backroom panels, or rubbing elbows with them in row after row of tightly packed cubicles. It’s the army of inventive cosplayers. And most importantly, it’s comic books, like the ones I was hoping to hunt down in the back of the convention center, along with submitting some I already own to certify their value.

“I have been trying to be stoic about it, but it’s hitting me this week. This would have been my 24th San Diego Comic-Con in a row,” said Ian Kerner, director of episodic sales at Technicolor, avid comic book collector and all-around pop culture geek. “I’ve watched it evolve from (just) a geek fest to a true pop culture phenomenon. The fact that we were able to depend on it happening every year was previously unprecedented.”

Kerner is not alone. For many who grew up feeling like their nerdy interests made them outsiders, Comic-Con represents validation, not only that those interests have conquered the world, but of a place where the hardcore fans can gather to celebrate them.

“As a kid who experienced being marginalized for my fandom, Comic-Con came to herald a general acceptance of embracing fantasy, and imagination. Things I never dreamed would be mainstream,” Kerner added. “It’s a celebration of being different. It’s something that is sorely needed right now, in this political environment. I fear it will never be the same, but I hope that it comes back bigger than ever next year.”

That camaraderie is the thing that a virtual Comic-Con can’t reproduce. Sure it’s a grind, hopping from panel to panel, navigating packed crowds and, in the case of journalists, relentlessly filing stories. It’s an endless loop that can last 12 hours a day and that, for the last few years, I have actually trained months ahead of time to be in shape for. But it’s also the biggest gathering of like-minded people outside of political conventions (which have also been forced to make huge changes thanks to COVID, come to think of it) and a place where we finally get to catch up with colleagues and friends we otherwise can’t see because they live hundreds or thousands of miles away.

That’s definitely the case for Tom Neely, illustrator of the New York Times best-seller “The Last Book on the Left” and co-creator of both the Image title “The Humans” and the cult hit “Henry and Glenn Forever.” A yearly attendee since 1999, he’s seen the event from both sides, first as a fan and then as a professional. “I have so many friends around the world who I only see for a few days every year at these conventions. Networking happens, sure, but mostly I miss seeing my friends and colleagues,” he said. “Cartoonists live a very secluded life, hunched over a drawing table all the time and conventions are the only time we really get out to socialize. SDCC is hard work but it’s also like summer camp.”

For Neely, SDCC’s huge industry parties and the networking opportunities are secondary to that community. “What I miss is hanging out by the hotel fire-pit late at night with some good friends who are all exhausted from working the floor all day, sharing whisky and passing joints and talking shit about comics,” He said. “Or wandering around the streets with a group of buddies laughing at all the ridiculousness of it all until you finally find a dive bar far away from all the convention noise and you have some real conversations about art (I miss you — you know who you are!)”

After all, only at SDCC can you spend the day with legions of fans, witnessing the birth of brands, careers, legends — and even marriages — under the city’s amazing weather, then dance the night away and discover you’re standing right next to Shazam himself, pumping his fist in the air to the music.

But of course, SDCC isn’t dead and won’t be anytime soon; Comic-Con International deserves enormous credit for figuring out how to work around the pandemic and not only stay alive, but stay relevant and make sure the show goes on by any means necessary. So while fans mourn the in-person event that never was, we can fill the void through our computer screens, and in the meantime take to heart what the San Diego Convention Center said on Twitter earlier this week: “We will be together again.”

A message to the @Comic_Con community, with love pic.twitter.com/3otI5LmKYr

Meanwhile, in the spirit of SDCC, I decided to take a trip to Mile High Comics in Denver, Colorado earlier this summer to visit the world’s biggest comic book store. You can watch that video here, and you can hang out with TheWrap all this week as we bring you our coverage of the first — but hopefully the last — Comic-Con@home.