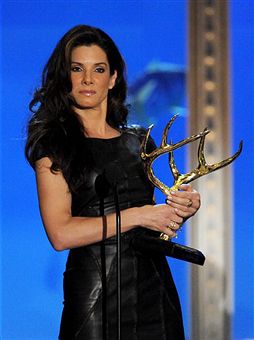 The 45-year-old Oscar winner is coming out of her shell on Sunday night to accept the MTV Generation Award in what will be her first appearance on TV since her well-publicized split with Jesse James.

Bullock received a standing ovation on Saturday night, when she made a surprise apeparance at the Spike TV "Guys Choice" awards, which won’t be broadcast until later this month. Bullock accepted the "Troops Choice" award for the year’s best entertainer, voted on by members of the military.

"Let’s be honest here, just for a moment. We’re all going to be honest, right?" Bullock told the crowd, according to People. "Did I win this for being entertainer of the year, or did I win this because of the spectacular I.E.D. [improvised explosive device] explosion that became my personal life?!"