Best Actress winner Sandra Bullock ("The Blind Side") was asked backstage what advice she’d give to someone starting out in the industry. 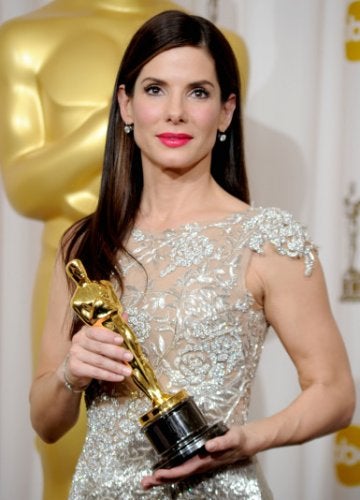 "Don’t aspire to be in these shoes. Walk in your own," she said. "Everyone’s really good at telling you what you should do… My mother really beat it into our heads to be original… Savor what you are, and not what everyone else wants you to be."

She continued her self-deprecating approach when asked if she ever came to think of herself as the favorite in her category. "Are you joking? No. As I said up on that stage, I questioned, did I win it or did I just wear eveyrone down? I didn’t aspire to this. I was in awe of it, I admired it, I got to watch it like everyone else did. I didn’t think… the opportunity would ever present itself for me to rise to that occasion. And I was OK with that. This came out of left field, every pun intended.

"This was the film I said no to," she continued. "If I thought this was going to be my golden ticket…

"I look at the company I keep in this category, and you can’t pick. There’s not one that rises above the others. I love the women that I got to spend this time with so much, and i feel like I get to share it equally in five parts."

In response to another question, Bullock said she’s not consciously drawn to youth-oriented projects. "We are presented with the opportunities we’re presented with in this business, and you’re able to make some of your own opportunities," she said. "But I think it makes a great inspirational story when you see what can work. I’ve seen it happen day after day in New Orleans — that’s why I love that town so much. And I love stories aobut passion and love. Love of country, love of people, love of sport. It makes a great film."

Bullock made quite a stir earlier in awards season by planting a kiss on her fellow — or should that be sister — nominee Meryl Streep. Asked why she thought it drew such attention, she said, "I think because no one expeects Meryl to roll with the flow like that. No one realizes how much Meryl Streep is. She just is, everything that Stanley Tucci said is right, and then some. And I don’t think anyone expected her to do it. She’s an aweome broad, and an extraordinary human being. I think it was because it was Meryl. I kissed Meryl.

Bullock on Saturday night won a Razzie Award as Worst Actress for "All About Steve." Asked what she thought of that juxtaposition with an Oscar, she said, "I had the best time at the Razzies last night. It probably means more that both of them happened at the same time. It’s the great equalizer. Nothing ever lets me get too full of myself. They’ll be side by side. The Razzie maybe on a different shelf, lower."

Asked what she wanted to do now that the pressure was off and the Oscars were over, she declared, "I just want a burger, and I want some food. I want to sit down… I want to eat and not sweat it and worry that the dress will bust open. I want to relax, and just eat. And then I’d like a nap."