Nobody has ever won an Oscar and a Razzie in the same year, but Sandra Bullock is on track to do just that after picking up the Worst Actress “honor” at Saturday night’s Golden Raspberry Awards in Hollywood.
As she promised to do when she was nominated, Bullock showed up to accept her award, joking that her vow to attend probably swayed the vote in her favor: “It goes to show that in Hollywood, all you have to do is show up and they’ll give you an award.”
In fact, while voting was going on in early February, Razzie organizers sent out a mass email to the group’s 700 voters, reminding them that Bullock planned to attend if she won.
Bullock brought along a cart full of DVD copies of “All About Steve,” the film for which she won, and asked the voters to watch it and decide if she really deserved the honor. If not, she said, “I will come back next year. I will give back the Razzie.”
Bullock and her co-star Bradley Cooper also won the Razzie for Worst Screen Couple.
By accepting her awards at the ceremony at Barnsdall Art Park, Bullock became one of the few winners to receive a Razzie in person. Halle Berry came to the tongue-in-cheek awards show in 2005 when she won her Worst Actress award for “Catwoman.” She brought with her the Oscar she’d won three years earlier for “Monster’s Ball.” 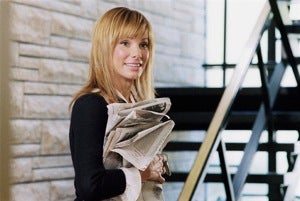