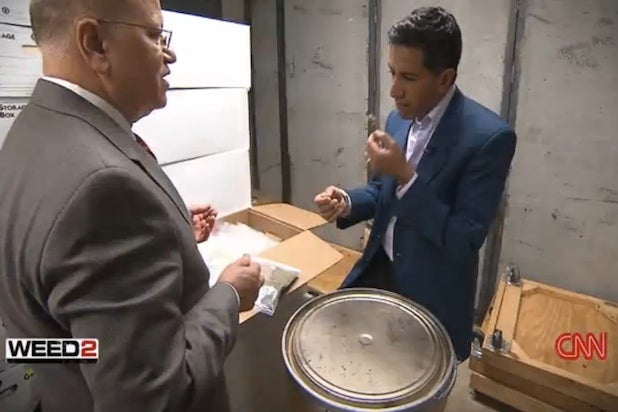 “I am not backing down on medical marijuana,” CNN’s chief medical correspondent Dr. Sanjay Gupta tells viewers. “I am doubling down.”

Gupta is back with “Weed 2: Cannabis Madness: Dr. Sanjay Gupta Reports,” the sequel to his critically acclaimed “Weed,” which was a ratings smash last August, scoring 1.21 million total viewers and 477,000 adults 25-54. This time, he’s profiling more medical marijuana recipients and sharing their success with the drug and their struggle to gain acceptance among policy makers.

I mistakenly believed the Drug Enforcement Agency listed marijuana as a schedule 1 substance because of sound scientific proof. Surely, they must have quality reasoning as to why marijuana is in the category of the most dangerous drugs that have “no accepted medicinal use and a high potential for abuse.”

They didn’t have the science to support that claim, and I now know that when it comes to marijuana neither of those things are true.

Gupta told TheWrap he still is incredulous the drug is still classified as a Schedule I substance, defined as “the most dangerous” drugs “with no currently accepted medical use,” despite the growing evidence to the contrary showing its benefits to treat a wide range of conditions.

Gupta acknowledges that many Americans have uncompromising views on the drug, but hopes his documentary can be used as a educating tool.

“People have very entrenched views about marijuana,” Gupta explained.  “Ever since 1936 when “Reefer Madness” came out — it’s a propaganda movie, but it cemented our point of view on marijuana.”

Could Gupta’s documentary have the same galvanizing effect on public policy as CNN’s “Blackfish”?

Gupta noted that lawmakers are taking notice of his reporting.

“Nobody expected Georgia would pass a medical marijuana bill,” Gupta explained but after a clip of his first documentary was shown to politicians, it passed overwhelmingly by a vote of 171-4.