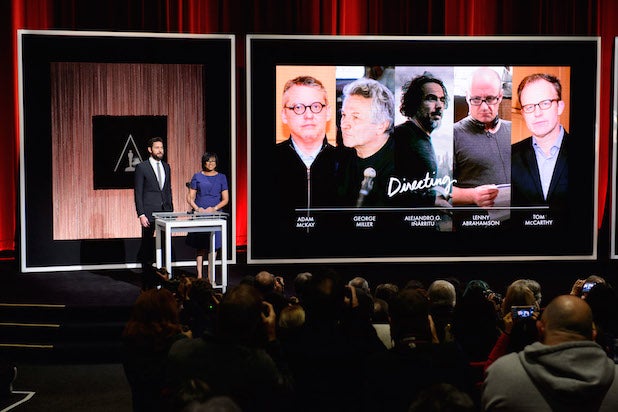 The Santa Barbara International Film Festival has opted to give its Outstanding Directors of the Year Award to the five men nominated for the Academy Award for Best Director: Lenny Abrahamson for “Room,” Alejandro G. Iñárritu for “The Revenant,” Tom McCarthy for “Spotlight,” Adam McKay for “The Big Short” and George Miller for “Mad Max: Fury Road.”

The five will be honored at a Feb. 11 ceremony at the Arlington Theater, which will include a conversation between the directors.

In past years, the festival has typically given the award to a single director and usually announced the recipient before Oscar nominations. Previous recipients have included Richard Linklater for “Boyhood,” Bennett Miller for “Foxcatcher,” David O. Russell for “American Hustle” and Kathryn Bigelow for “The Hurt Locker.”

The 2016 Santa Barbara Film Festival will run Feb. 3-13 in the coastal town north of Los Angeles.