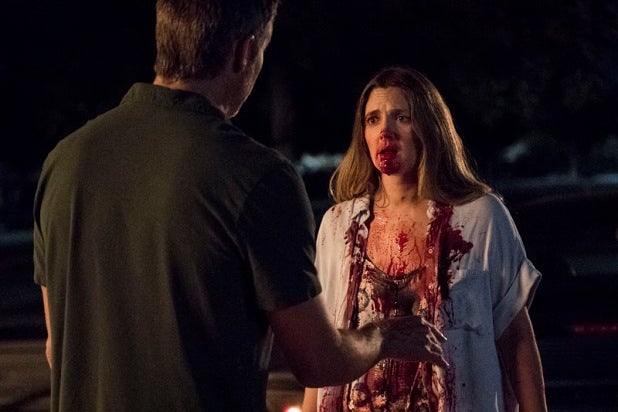 See some of the best — and angriest — Twitter responses below.

Good morning to everyone EXCEPT whoever decided to cancel #SantaClaritaDiet pic.twitter.com/AvKW4vNSIC

Me walking into netflix HQ after they announce their cancelling santa clarita diet #SantaClaritaDiet pic.twitter.com/XgTFKx3w2o

Me cancelling my Netflix subscription and converting to Amazon Prime now that #SantaClaritaDiet has been cancelled:
pic.twitter.com/s71FzQVXO1

WHY DOES NETFLIX THINK ITS OKAY TO CANCEL SANTA CLARITA DIET THERE ARE SO MANY UNANSWERED QUESTIONS AND ITS SO FUNNY!! IM NOT HAPPY ???? #SantaClaritaDiet pic.twitter.com/SWcGQWhMWl

Netflix: “We’re canceling that original show you all love. We won’t tell you why, nor will we let them wrap the story up. Hope you like perpetual cliffhangers.”

It's becoming easier to drop @netflix when they make stupid decisions like canceling #SantaClaritaDiet. pic.twitter.com/43NW8pgcur

okay so, a third season of 13 Reasons Why (that no one asked for) is approaching but #SantaClaritaDiet was canceled? make it make sense pic.twitter.com/O946E3K1ZZ

so 13 reasons why apparently gets a 3rd season, but a quality show like #SantaClaritaDiet doesn’t even get the wrap up season it deserves. trash. pic.twitter.com/bQabKpeUnB

Why would you cancel #SantaClaritaDiet?
It has
•Incredible main characters
•An original concept
•Jokes that are actually funny
•A strong fanbase
•Room to extend the story further pic.twitter.com/M1oNzcn5ux

“Like our audience, we were all-in on Sheila and Joel. Their relationship, in the face of incredible adversity, was inspiring to write and to watch. Mostly, they were funny, which in a comedy is important,” creator and executive producer Victor Fresco and executive producer Tracy Katsky said in a joint statement on Friday. “Working with Drew and Tim, along with the immensely talented Liv and Skyler, was a joy and a once in a lifetime experience.”

“Netflix took a chance on this odd show and for that we will always be grateful. They were supportive, ever positive, and appreciative of our work. Until about noon today. Still, they were just one phone call away from being a perfect studio. Not bad,” they continued. “Everything ends. This was a thing. And so it ended. We’ll miss it but are proud of the work we did and will always appreciate the love and enthusiasm we felt from our audience. It if was up to them, Sheila and Joel would continue for another 10,000 years.”

For those who are just waking up to the news, below is Netflix’s explanation (of sorts) for the seemingly unpopular opinion.

“The world had never known a ‘zom-com’ until ‘Santa Clarita Diet,’ and we’re indebted to creator Victor Fresco for bringing this idea to Netflix. To their endless credit, the incredible Drew Barrymore and Timothy Olyphant were totally game, with an uncanny knack for comedy that brought Sheila and Joel Hammond to vibrant life, even though one of them was undead. We’re grateful to Victor, Drew, and Timothy, along with fellow executive producers Tracy Katsky, Aaron Kaplan, Chris Miller and Ember Truesdell and the terrific cast, including Liv Hewson and Skyler Gisondo, and crew for three hilarious seasons for Netflix members to discover for years to come.”