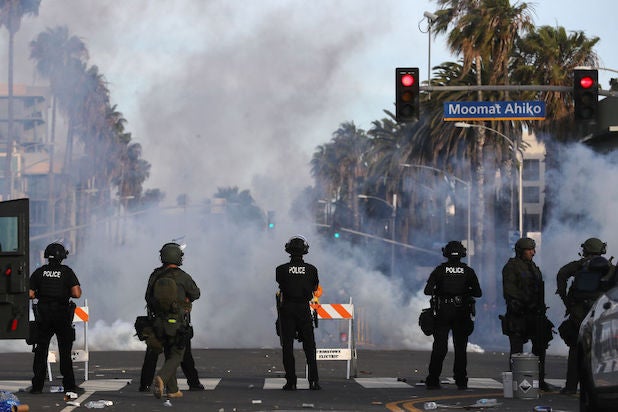 Police use tear gas on demonstrators protesting the death of George Floyd on May 31 in Santa Monica. (Photo by Mario Tama/Getty Images)

In a last-minute change, Santa Monica and Beverly Hills moved up their citywide curfews to 1:30 p.m. and 1 p.m., respectively, in response to the ongoing protests sparked by the killing of George Floyd.

Earlier on Monday, the two cities — along with Long Beach — announced they would be implementing 1 p.m. curfews for business districts and 4 p.m. to 5:30 a.m. curfews for the rest of their cities. (Long Beach has not moved up its curfew.)

“Sunday was one of the most distressing days in Santa Monica history. We know better than to let the looters obscure the message of the protesters, who have indeed been heard,” Santa Monica Mayor Kevin McKeown said in a statement. “What a small and selfish criminal element has done instead is to bring our community more closely together. We will support our local businesses to recover from this.”

Meanwhile, Culver City is implementing a 4 p.m. curfew that ends 5:30 a.m. the following day. West Hollywood is also implementing a curfew at 4 p.m. until sunrise. The remainder of Los Angeles County begins its curfew at 6 p.m. on Monday night until 6 a.m. on Tuesday.

Public transportation in the county has also been impacted by the curfews; in Santa Monica, the Big Blue Bus was shut down at noon. The Culver CityBus will be out of service beginning at 8 p.m. until 5:30 a.m.

The protests around the country continued over the weekend, with police often clashing violently with protesters and making hundreds of arrests. By Sunday, the National Guard had also descended upon Los Angeles, calling to mind similar action taken in 1992 during the Rodney King uprising.