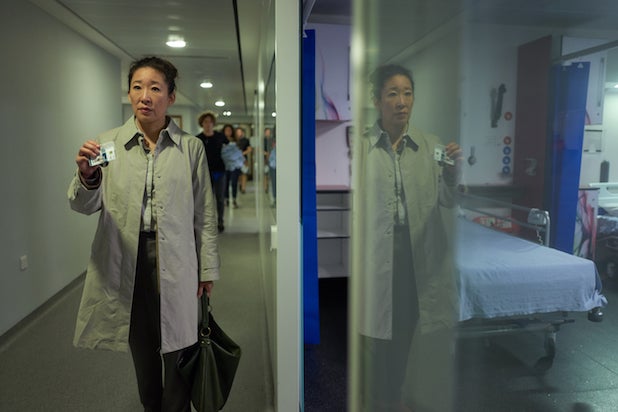 BBC America boss Sarah Barnett has been named entertainment president of AMC Networks. Her promotion comes as part of an overall company reorg, one which we discussed Monday with both Barnett and her boss, AMC COO Ed Carroll.

“The ability to think across the four networks [AMC, BBC America, IFC and SundanceTV] is truly the motivation behind this,” Barnett said of the consolidation of resources. “And it’s the right one and the proper one and a smart one. It allows us to retain the individual brands of each of these four different businesses, and yet play to our collective strength. That’s the opportunity here.”

Unfortunately, the cost will be about 40 employees losing their jobs, an individual with knowledge of the restructuring told TheWrap.

Focusing on the positives, Carroll also likes the leveraging opportunities here. And in terms of choosing Barnett to steer the ship, it certainly didn’t hurt that “Killing Eve” on her BBC America was a big hit, he told us.

“Obviously, it’s a nice set of facts that ‘Killing Eve’ was one of the hottest and most successful shows on television [this] year,” Carrol said.

Barnett and her team developed the Sandra Oh drama.

While she does not directly replace Charlie Collier, who left AMC last month to lead “New Fox” once most of 21st Century Fox’s assets officially go to Disney, Barnett will take on many of his high-level responsibilities. Her role is technically a new one with AMC Networks, however.

“Sarah has demonstrated at a couple of our networks — at SundanceTV and at BBC America — that she has a keen eye for quality and creating value,” Carroll said. “And that manifested itself in shows like ‘Rectify’ and ‘Top of the Lake’ and ‘Orphan Black’ and ‘Killing Eve.'”

Barnett used the word “fandom” a bunch of times at this point in our interview, which segued us perfectly to the “Better Call Saul”/”Breaking Bad” Universe. We asked Barnett to give us her outsider-insider opinion on how many seasons the prequel has left in the tank, since showrunner Peter Gould has previously told us we’re “getting closer to the end than we are to the beginning.”

“I actually think my husband would leave me if it doesn’t go on forever,” Barnett said.

We’re good with that. (The “Saul” forever thing, not the dissolution of her marriage.)