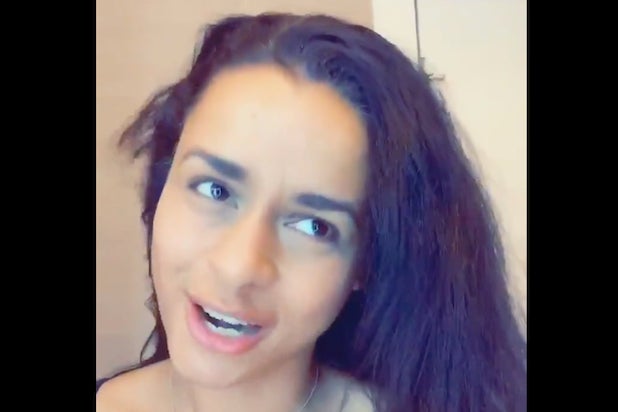 Comedian Sarah Cooper is back with another video — and this time, she’s gone fully meta.

In a video posted to her TikTok account on Friday, Cooper lipsynced to President Donald Trump’s comments about a possible ban of TikTok.

“We’re looking at TikTok. We may be banning TikTok, we may be doing some other things, there are a couple of options. But a lot of things are happening, so we’ll see what happens. But we are looking at a lot of alternatives with respect to TikTok,” Trump told reporters on Friday before he boarded a helicopter, which can be heard whirring in the background. In her version, Cooper even supplies visual effects, with her blowing as she mouths Trump’s words.

Earlier on Friday, Bloomberg reported that Trump was planning on ordering ByteDance, the Chinese parent company of TikTok, to divest ownership of the app. Microsoft is in talks to potentially acquire the massively popular app, according to Bloomberg.

A spokesperson for TikTok did not comment on the potential acquisition but said the company was “confident” in its “long-term success.”

“Hundreds of millions of people come to TikTok for entertainment and connection, including our community of creators and artists who are building livelihoods from the platform,” the spokesperson told TheWrap earlier on Friday. “We’re motivated by their passion and creativity, and committed to protecting their privacy and safety as we continue working to bring joy to families and meaningful careers to those who create on our platform.”

Take a look at Trump’s original statements and Cooper’s version below.

.@JenniferJJacobs: Are you expecting a @tiktok_us decision today?"

How to tick tack pic.twitter.com/1Mn8nk363f