She may be the Duchess of York, but Sarah Ferguson was the queen of the tabloids back in the ‘80s and ‘90s. After her tabloid-fodder break-up with Prince Andrew, Fergie took a job as spokesperson for Weight Watchers to help erase a debt of 4.2 million pounds. Since then, she’s been involved with numerous charity organizations such as Children in Crisis and the American Cancer Society.

Now she’s turned her attention to film producing. “The Young Victoria,”, starring Emily Blunt and Rupert Friend, grew out of research for a book on the 19th-century queen of England. Here, she talks about tabloids, the death of Lady Diana and the Obamas.
Why Victoria and Albert … haven’t you had enough of royals?
It’s the greatest untold love story of all time. I think the love that Albert and Victoria had, and I feel very close because I think if I’d only had fought harder — Andrew and I had fought harder — for our love, we’d probably still be together now. We’re divorced to each other, not from each other in order to bring up the girls.
You discovered their story researching one of your history books.
And it’s all true. And our movie’s all true; we didn’t add any Hollywood bits. I first went to Hollywood 15 years ago and suggested the movie, and the scriptwriter they gave me put Queen Victoria in bed with Lord Melbourne in the opening scene. And I said, “I’m sorry, but where in the history books does it actually say that happened?”
So I tore up the script and waited. And then five years ago, when I met Graham King, and he promised that all of this would be filmed in Britain, British cast, and was really upholding the values of Queen Victoria. 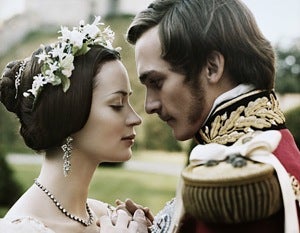 How much does your own experience with the tabloids come into play?
I don’t understand — though I should now — why people sell newspapers for putting someone down.
In my life in London, in court, Diana was the saint and I was the sinner –and “bad Fergie” sold papers. “Good Diana” sold papers. And I think it’s interesting that Victoria had to go through that with the illustrated London news at the time.
Where you were when Princess Di died — and what her last words were to you?
I was in Italy and I heard it on the news and I didn’t believe it so I rang on the mobile. I said, “Dutch, Dutch, this is ridiculous. Call me. What’s happened, are you okay? I’m coming!”  And then of course no, she had gone.
I’ve never really gotten over it because she was my fourth cousin, my best friend since I was a little girl and then my sister-in-law. And she brought me in to marry Andrew and we were a team together.
How have you changed, from your privileged past?
Yesterday, a little girl, who was obviously a new girl in the public-relations world, was sent to look after me and she was running late and she came rushing up to me, bags flying, and said, “I’m late! I’m late! I’m so sorry!” And I said, “No, it’s great. You can only tell me you’re late if we’re in a real bad situation in Afghanistan. Don’t worry! It doesn’t matter!”
And then she went on and said, “Now, this is what you need to say and this is what you need to do. And then you need to do this!”
I felt myself about to go, “Excuse me, young little girl, now come on, please.” And then I went, “Sarah, don’t be such an old moose! She’s very excited, she’s feeling bad. It doesn’t matter!”
And that was becoming to understanding that I’m now at the beginning of middle age. I’m 50, I’m in the kindergarten of middle-age. Now I’ve got to understand there’s a young, modern world coming who perhaps have no idea who I am, even.
Are you confident in Obama?
Yes. Yes. I am such a supporter that I went to the White House and asked what I can do to support the First Lady. I would like to be in service to this country because the American people saved my life.
How so?
Twelve years ago I came to this country, and Weight Watchers employed me — I got a job and I had no confidence. And when I first started out it was so difficult because I thought that everyone was going to judge me. And that’s why I’m so pleased to be liberated now because I am me now.
As the decade comes to an end, what are you hoping to see happen in the next?
There’s no question Copenhagen is very important to me, and I’m really looking at what we do about this lifestyle situation, cleaning up the environment, growing more trees, maybe pumping seawater into the deserts. I am very strong that we really need to make what they do in Copenhagen into a very lay person’s point of view of how they can help save our environment.
x
Looks like you're enjoying reading