Sarah Jessica Parker is speaking out once more on the current status of her relationship with former “Sex and the City” co-star Kim Catrall — and she’d really like it to stop being labeled a “fight.”

The “And Just Like That…” star got into things a bit on THR’s Awards Chatter podcast, taking the opportunity to clarify the matter. Running through the timeline of events, Parker noted that it has all been very “painful” to hear everything, but that the hardest part has been seeing how the tension has been played up in media coverage — particularly her role in it.

“It’s so painful for people to keep talking about this ‘catfight’ — a fight, a fight, a fight. I’ve never uttered fighting words in my life about anybody that I’ve worked with, ever,” Parker said. “There is not a fight going on. There has been no public dispute or spat or conversations or allegations made by me or anybody on my behalf. I wouldn’t do it. That is not the way I would have it. So I just wish that they would stop calling this a ‘catfight’ or an ‘argument,’ because it doesn’t reflect actuality — there has been one person talking.”

Parker added that Catrall’s repeated claims that Parker “could’ve been nicer” on the set of “Sex and the City” and that they were never friends were hard for her, but that “it’s not for me to say that ‘you’re wrong,’ you know, ‘it was, for you, a great thing,’ I don’t know.” That said, Parker defended her actions on set, saying she acts the same on any project. 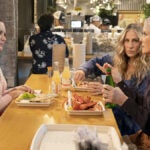 Also Read:
‘And Just Like That': 5 Ways ‘Sex and the City’ Spinoff Went So, So Wrong – and Why Most Reboots Fail

“I’ve spent a lot of years working really hard to always be decent to everybody on the set, to take care of people, to be responsible to and for people, both my employers and the people that I feel I’m responsible for as a producer of the show,” she said. “And there just isn’t anyone else who’s ever talked about me this way, so it’s very painful.”

Parker further explained that not asking Catrall to be part of “And Just Like That…” was a decision made purely based on Catrall’s own words over the years, as she repeatedly said publicly that she had no interest in returning to the character of Samantha.

“We did not ask her to be part of this because she made it clear that that wasn’t something she wanted to pursue, and it no longer felt comfortable for us, and so it didn’t occur to us,” Parker said. “That’s not ‘slamming’ her, it’s just learning. You’ve got to listen to somebody, and if they’re publicly talking about something and it doesn’t suggest it’s some place they want to be, or a person they want to play, or an environment in which they want to be, you get to an age where you’re like, ‘Well, we hear that.'”