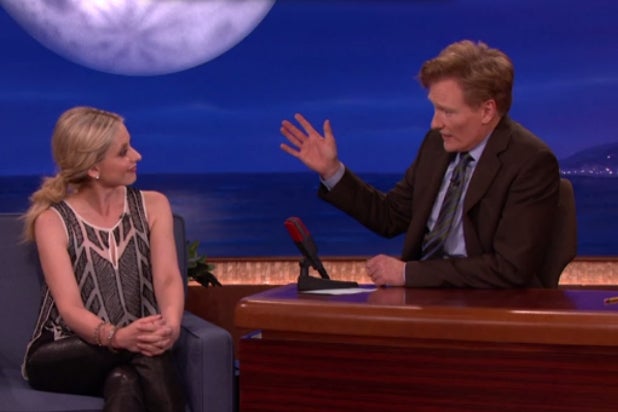 Sarah Michelle Gellar has a Candice Bergen “sex doll” in her dressing room on the lot for CBS’ “The Crazy Ones,” the actress told Conan O’Brien.

Gellar was busted when co-star Josh Groban tweeted out a creepy photo of the very lifelike doll in Gellar’s trailer. Gellar told the “Conan” audience that she found the doll while snooping in the closet of the CBS comedy’s creator, David E. Kelly.

She clarified that Kelly “doesn’t use it as a sex doll.”

Gellar explained: On “Boston Legal,” William Shatner‘s character had feelings for Bergen’s character that were not reciprocated. So he did what any red-blooded American male would do, and had a doll of her made.

There is one more saving grace: The doll is not anatomically correct.

“I do not put my penis in,” Gellar said.