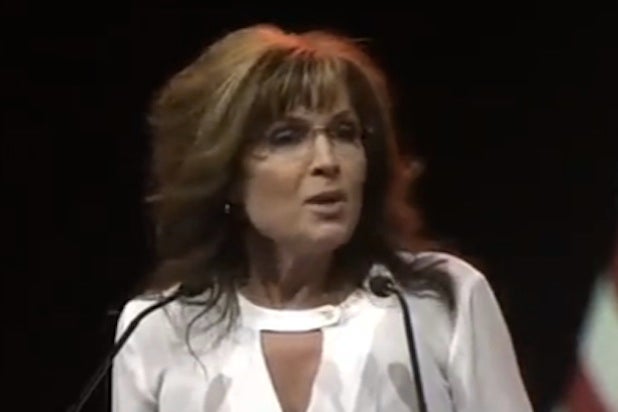 Former Alaska governor and failed vice presidential candidate weighed in on the sexual molestation scandal surrounding “19 Kids and Counting” star Josh Duggar on Thursday, by attempting to shift the focus onto Lena Dunham.

In a lengthy Facebook rant, Palin pondered why the media purportedly gave “Girls” star Dunham a pass on a controversial passage in her memoir, in which she describes exploring her younger sister’s genitals, while undertaking a “hell-bent mission to go after the entire Duggar family for one member’s wrongdoing.”

Palin began her message in ALL CAPS, the preferred font of Internet cranks worldwide.

HEY LENA, WHY NOT LAUGH OFF EVERYONE’S SEXUAL ‘EXPERIMENTS’ AS YOU HAUGHTILY ENJOY REWARDS FOR YOUR OWN PERVERSION? YOU PEDOPHILE, YOU,” the woman who was once poised to be a heartbeat away from the presidency wrote.

While Palin insisted that she’s “not defending the Duggar boy’s obvious wrongdoing,” she did criticize the media at length for giving Dunham and other “chosen ones” a break.

Oh, and she also assigned some Christ-like imagery to Duggar, who stands accused of sexually molesting multiple underage girls, a number of his sisters among them.

“Case in point, they suggest Lena Dunham‘s sexual assault on her sibling is cute, and she’s rewarded for it with fame and fortune,” Palin wrote. “Meanwhile, they crucify another, along with an entire family.”

HEY LENA, WHY NOT LAUGH OFF EVERYONE’S SEXUAL “EXPERIMENTS” AS YOU HAUGHTILY ENJOY REWARDS FOR YOUR OWN PERVERSION? YOU…

In the passage from her memoir “Not That Kind of Girl,” Dunham recalled opening up her one-year-old sister’s vagina when Dunham was seven.

“One day, as I sat in our driveway in Long Island playing with blocks and buckets, my curiosity got the best of me. Grace was sitting up, babbling and smiling, and I leaned down between her legs and carefully spread open her vagina. She didn’t resist and when I saw what was inside I shrieked,” Dunham wrote.

Dunham has been criticized for the passage in the past. Notably, National Review writer Kevin D. Williamson used the passage to label Dunham and her parents “child abusers” in a piece called “Pathetic Privilege.”