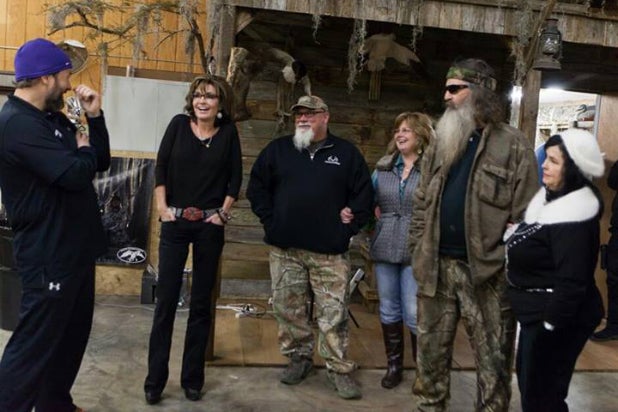 The world can breathe a collective sigh of relief: Sarah Palin has weighed in with her opinion on “Duck Dynasty” patriarch Phil Robertson’s anti-gay sentiments and his subsequent suspension from the A&E hit reality series.

Shocker: The former Alaska governor and defeated GOP vice presidential candidate is on the side of the grizzled guy who isn’t down with homosexuality.

Palin posted to her Facebook Wall Wednesday evening: “Free speech is an endangered species. Those ‘intolerants’ hatin’ and taking on the ‘Duck Dynasty’ patriarch for voicing his personal opinion are taking on all of us.”

Paraphrasing Corinthians, Robertson added, “Don’t be deceived. Neither the adulterers, the idolaters, the male prostitutes, the homosexual offenders, the greedy, the drunkards, the slanderers, the swindlers — they won’t inherit the kingdom of God. … Don’t deceive yourself. It’s not right.”