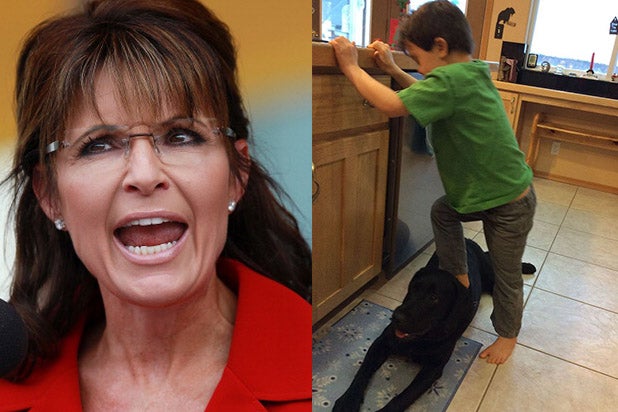 Sarah Palin is barking loud and clear in her criticism of the animal rights group PETA, issuing more criticism Monday of what she thinks is the group’s double standard.

In a statement to NBC’s “Today” show, Palin expanded on a Saturday Facebook post, calling out the group for singling out her son but staying silent when Hollywood figures and liberal politicians do what she deems as objectionable things to animals.

Where have they been all these years? Maybe enjoying a good steak when their Woman of the Year, Ellen DeGeneres, posted the exact same sweet image of a child with her dog. Or maybe they were off moose hunting when their Man of the Year, Mayor Bill de Blasio, dropped and killed a critter at a political photo op? Who knows what they were doing when their Man of All Time, Barack Obama, admitted to actually EATING dog, and enjoying it! C’mon PETA — where’s the beef?

No, the double standards applied by hypocrites at PETA make me and every other kid — and dog-lover — say “kiss my okole.” They’re not attacking me because I showed people a special needs child and his happy, healthy, beloved service dog; they’re attacking me because, well, I’m me. So what’s new? PETA throws raw meat in front of their attack dogs and says sic ‘em, and we have a choice in how to react to these kind of haters who’ll keep on hating. We either accept their attacks as stumbling blocks, or see them as stepping stones to make a point about truth. Ironically, PETA has made my exact point I wrote about in my New Year’s Resolution piece. Nice!

Palin’s rant against the animal rights group is a follow-up to her original Facebook message defending her and son Trig after PETA came out with objections to a photo featuring Trig stepping on the family dog.

“PETA simply believes that people shouldn’t step on dogs, and judging by the reaction that we’ve seen to Sarah Palin’s Instagram [sic] photo, we’re far from alone in that belief,” Peta said in a statement. “Palin’s Facebook response shows us that she knows PETA about as well as she knows geography.”