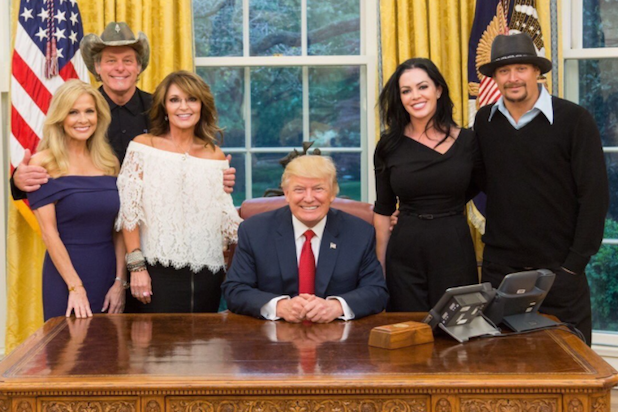 Sarah Palin dropped by CNN on Thursday to discuss her Wednesday dinner at the White House, telling Jake Tapper that she brought along rockers Kid Rock and Ted Nugent because “Jesus was booked.”

“President Trump had called to invite just to touch base,” Palin told Taper when asked how the dinner came to be. “He asked that I invite a couple of friends.”

“So you invited Kid Rock and Ted Nugent?” questioned Tapper.

“Well, Jesus was booked,” Palin responded. “So yes, I invited my buddies Kid Rock and Ted Nugent, some bold, courageous all-American dudes who I knew would have good conversation with the president and get to express a lot of good, middle-class work ethic issues and policy proposals that they can all relate to — and that’s exactly what happened at the dinner.”

Nugent, who performed at multiple Trump rallies before his election, is worth an estimated $20 million, while Kid Rock is said to be worth $80 million.

Palin and her rocker pals posed for some photos alongside Trump. They also made time to take a swipe at Hillary Clinton, posing under a portrait of the former first lady and Democratic candidate for president.

Nugent’s wife posted the photo on Instagram with the caption: “Sarah Palin, Kid Rock & Ted Nugent walk into a bar…”

Following her visit to the White House, Palin took to her blog to write: “President Trump’s invitation for dinner included bringing a couple of friends; it was the highest honor to have great Americans who are independent, hardworking, patriotic, and unafraid share commonsense solutions at the White House.”