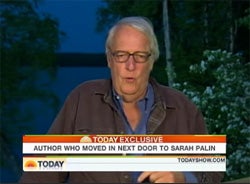 Tuesday’s “Today” show ran an interview with Joe McGinniss, the author who moved into the Palin’s neighborhood in Wasilla to write a book on the former Alaskan governor tentatively entitled. “Sarah Palin: The Year of Living Dangerously.”

"Is it good, immersive journalism, or is it stalking?" NBC asked.

Palin declined to be interviewed. But when the statements she said she e-mailed NBC did not appear in the segment, Palin went off on NBC and “lamestream” media via her platform of choice: Facebook.

In a note posted on her Facebook page – reprinted for non-Facebook fans below – Palin said she and Todd “spent our Memorial Day evening exchanging emails with NBC” and provided the Peacock with “carefully crafted” statements, only to see NBC not run them on Tuesday.

NBC broke their promise and didn’t run our statements after all. So, the “journalist’s” sensational claims about us being Nazis went unchallenged. We emailed NBC this morning to ask why our statement wasn’t aired. We were given a lame excuse and told that they would run it tomorrow (after the damage had been done) and that they would be happy to interview me about it (which was their aim all along because journalism today is all about ratings and not about truth).

He added that it’s a coincidence the home he’s renting is 15 feet from where Palin lives.

Is It Any Wonder Why We Call Them “Lame”?

It may seem like a small thing, considering the state of the union and international issues of the day, but let me share some facts surrounding a most recent illustration of the untrustworthiness of America’s mainstream media.

Yesterday, Todd and I spent our Memorial Day evening exchanging emails with NBC in regards to the interview they conducted this morning with our new neighbor. As you’ll recall, the “journalist” Joe McGinniss moved all the way from Massachusetts to Wasilla – literally right next door to our home – after tracking us down in various forums this past year, so that he could be close to his “subject matter” while he writes his book about me.

When NBC asked to interview me for this story, I politely declined. NBC then asked for a statement from us and promised to run it as a full screen graphic during their interview with McGinniss. We were glad to provide a statement and appreciated NBC’s promise to run it. Todd and I both crafted the statement very carefully because our new neighbor has taken to accusing us of “inciting hatred” – a charge which we obviously take very seriously. We knew that he would make more accusations like this, and we felt very strongly that such comments should not go unanswered. So, we emailed NBC the following statements:

“McGinniss has followed us for some time now, from showing up on our doorstep last winter, bidding over $60,000 for a military charity auction dinner with me, writing the hit pieces, attending at least one Outside book event, etc. He has a right to pursue his subject, I suppose, and certainly has a right to live wherever he wants, but my family also has a right to expect privacy, and hopefully to enjoy peace this summer. Good fences do make for good neighbors. The fence is now up, and I hope that we can enjoy peace. The media sensationalizes the recent McGinniss’ tactic so the public will tune in to whatever the latest episode is, always with ratings in mind, and that’s unfortunate.” – Sarah Palin

“What’s also unfortunate is journalists’ tactics like this, because it keeps good people from wanting to get involved in public service.” – Todd Palin

NBC responded to thank us for our statements and again promised that they would “make sure” that the Today Show airs both of our statements “as a fullscreen graphic during the segment tomorrow.” We were grateful because we knew that our statements would counter any accusation of “inciting hatred.” And boy was it necessary because in his interview on NBC this morning McGinniss doubled down on his accusation to actually compare us to the Nazis!

But there was just one problem: NBC broke their promise and didn’t run our statements after all. So, the “journalist’s” sensational claims about us being Nazis went unchallenged. We emailed NBC this morning to ask why our statement wasn’t aired. We were given a lame excuse and told that they would run it tomorrow (after the damage had been done) and that they would be happy to interview me about it (which was their aim all along because journalism today is all about ratings and not about truth).

The interview itself was quite an eye-opener. I’m not sure what “ugly innuendo” was in my Facebook post or why it is so controversial to suggest that the presence of a hostile “journalist” writing a hostile book about me is an imposition on my children who simply want to enjoy their summer outside. When I say or write “leave my kids alone,” it means simply that: let my kids have a fun summer without having a “journalist” 15 ft from their play area. How that equates me with the Nazis is quite beyond me. If receiving nasty emails and even death threats is the standard by which we judge “inciting hatred,” then the left in this country has been “inciting hatred” on my family for almost two years now. We don’t complain about this or call people “Nazis” because we value freedom of speech enough to believe that even ignorant and hateful people have a right to it. It’s a shame that a self-proclaimed “journalist” doesn’t understand this.

And it’s a shame that Todd and I had another disappointing encounter with the media on Memorial Day of all days. It was time that we could have spent with our kids and on a day when we honor those who have died in defense of our Constitution, including our freedom of the press.

Freedom of the press is integral to our democracy, but reporters must be held accountable because with power comes responsibility. A corrupt, deceptive, and manipulative media can ruin the lives of good people, disrupt families, destroy reputations, and ultimately hurt our country.

I’d like to believe that it’s not too late to demand integrity from our media. Thank goodness for social networking sites like this and new media sites which have allowed us to get around the “lamestream” media and present the facts. But let this story be another example of why you must seek out facts and truth about anything and everything you see reported today.