So, one day after her star turn on the second show of Jay Leno’s new “Tonight Show,” Sarah Palin is shopping a reality show around Hollywood?

Makes sense when you think about it.

I don’t mean because, with 2 million copies sold of “Going Rogue,” she’s a bestselling author. Or because HarperCollins announced Wednesday that Palin is doing another book that will include, as the publisher said in a statement, “selections from classic and contemporary readings that have inspired her, as well as portraits of some of the extraordinary men and women she admires and who embody her love of country, faith and family.” 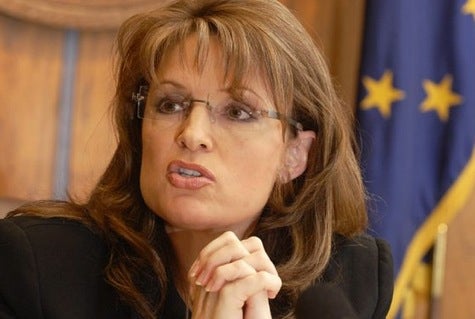 I don’t mean because she’s the top draw and fundraiser for the GOP in this year of midterm elections. And I don’t mean because the Fox News contributor is the Queen of NASCAR, the Tea Party and, as Oprah, Leno and O’Reilly will tell ya, the biggest talk show guest "get" around right now.

Like Palin’s heavily criticized, seemingly sudden decision to resign from office in America’s northernmost state last year, it suddenly makes a lot of sense when you really think about it.

“This is America,” Sarah Palin said when she accepted the GOP’s vice presidential nomination on Sept. 3, 2008, and became only the second woman ever to run on a major party’s presidential ticket, “and every woman can walk through every door of opportunity.”

With Mark “Survivor” Burnett in tow, the former Alaska governor has had every door open up in front of her this week in L.A. as she supposedly has been pitching a high-impact, big-vistas look at her home state. Reports say Palin’s been to ABC, Fox and NBC on Wednesday and will visit CBS on Thursday.

BTW — On the subject of that reality series pitching, it seems to me, with her recurring gig on Fox News and her deal with HarperCollins, any show Palin does likely has a first option of refusal clause with Fox/News Corp. … maybe what she’s doing is a one-off like those occasional docs Oliver North does for Fox News.

For any other failed Republican VP candidate, it might seem weird. But for Palin, who stopped by some pre-Oscar courtesy suites, gave a $1,700 donation to the Red Cross and had a green-room visit to “American Idol” as well, the real question is not if she is doing or not doing a reality show with Mark Burnett but why, how and what it tells us about what it is to run for president in the second decade of the 21st century.

A natural-born media circus, Palin's post-campaign career seemed to careen, as she suddenly resigned her governorship and still held the national spotlight, out of control but never off the rails. With the scent of a presidential run never leaving the room, Palin has cemented a strong constituency of her own among conservatives. She virtually singlehandedly invented the Tea Party movement and still got them to pay her $100,000 to speak – crib notes scrawled on her palm and all – at their first national convention in Nashville last month.

How post-modern America is that?

While bouncing from the savvy Facebook barb of "death panels" — which almost fatally sidetracked Barack Obama's health-care reforms — she went through farcical family in-fighting, with her almost son-in-law Levi Johnston talking to the press about the private Palin and posing for Playgirl. That should have killed any lesser political career.

All that, plus sniping from former McCain aides looking to raise their punditry profile, and she came out poised with her book and a populist heartland book tour that saw her embattled and confessional and right back again, often within the same news cycle. The thing is, like CBS' often underrated but always high ratings hit “Two and a Half Men,” she does it week after week.

Why? Because it makes sense.

Every era eventually finds a new way for candidates to run for the presidency. John Kennedy instinctively understood television more than anyone before him or of his time. Richard Nixon, who lost by a hair and some badly applied make-up to JFK in 1960, soaked up everything about advertising to sell himself, as the bestseller "The Selling of the President" captured in 1968, as a dependable product.

Ronald Reagan grasped the mythology of a new morning and a simple narrative with a clear leading man who never missed his mark. When other Democrats were weary of taking on the incumbent, Bill Clinton led a pop-culture and policy-wonk insurgency that overthrew King George I. Barack Obama grasped the grassroots and the endless reach of social networking to, as anybody raised in Hawaii should, get up on top of that wave of history and ride it to victory in 2008.

It’s easy to forget that if she gets the Republican nomination in 2012, Sarah Palin will be making some long-overdue history of her own as the first women to make a serious run for the Oval Office on her own merits. But that’s secondary at best in our 24/7 Age of Instant Celebrity.

What matters is that Palin shamelessly and instinctively understands that, in a nation where fame and face time are the only true currency, she’s building the perfect presidential race for our times.

Sarah Palin is the perfect candidate for an America of “Two and a Half Men,” and she knows it. That’s why it makes sense.

And that’s why, despite what polls may or may not say, on reality TV or not, Palin’s coming to a Nielsen box, bookstore, Twitter blast or White House near you.

Because, like “Two and a Half Men, “ Sarah Palin’s the highest-rated show in town … and that’s how you run for president in 2012