Saudi Arabian crown prince Mohammed bin Salman will have plenty of room to unwind after his meetings this week with Hollywood executives — he’s rented out the Four Seasons Hotel in Beverly Hills for the duration of his visit.

That should buy him respite from the honking horns of Los Angeles, and from the feminist protesters who object to his government’s treatment of women. The royal heir, also known by the abbreviation MBS, is in Hollywood to meet with such executives as Rupert Murdoch, Brian Grazer, WME boss Ari Emanuel, Disney CEO Bob Iger and Oprah Winfrey.

“The expense of a short-term buyout is mesmerizing,” an insider with knowledge off the situation told TheWrap. “Not only do they have to convince a hotel to shut down their operation — but also, to relocate high-end guests who already made reservations. That is not something you see every day in Beverly Hills.”

A spokesperson for the Four Seasons declined to comment. But another person familiar with the prince’s  accommodations said MBS rented a total of 285 rooms, including 100 suites. Rooms at the hotel start at around $600.

In case the Four Seasons feels a tad claustrophobic, the 32-year-old crown prince rented 40 more rooms at the nearly L’Ermitage, where rooms start out at $559. 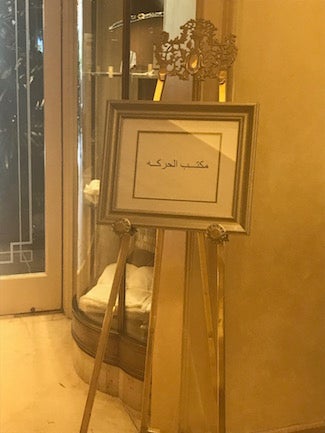 A sign in Arabic at the hotel lobby that reads: “Department of Transportation”

Reps for the hotel did not immediately respond to a request for comment.

The crown prince is in town as part of a coast-to-coast meeting spree.

“He’s meeting with every major studio,” one insider told TheWrap on condition of anonymity, saying of MBS’s team: “I wouldn’t put it past them to have actual ideas in mind for what they want to invest in.”

This isn’t the only time MBS has bought out a hotel. As Recode reported over the weekend, MBS also bought out the Four Seasons Silicon Valley from April 2 to April 7. The hotels is closed to the public this week, Recode said.

According to memos obtained by the site, some of the Silicon Valley’s hotel guests were also relocated due to the presence of a “large VIP delegation” with “high-security needs.”

The prince’s trip to Hollywood has sparked curiosity among industry leaders who — let’s just say this bluntly — like money. Theater owners and Hollywood studios have been salivating since Saudi Arabia ended its 35-year ban on movie theaters in December.

Bin Salman has also sought to open up Saudi Arabia to new forms of industry — such as entertainment — instead of relying so heavily on oil, the major source of Saudi Arabian wealth.

But not everyone is happy. On Monday, demonstrators from the feminist group Code Pink protested outside WME’s Beverly Hills offices, ahead of the prince’s meeting with Emanuel. WME and MBS are finalizing a deal in which the desert kingdom will acquire a minority share in Endeavor, WME’s parent company.

The crown prince has drawn international scrutiny to his oil-rich kingdom for mass arrests of 200 relatives in what he has billed as an anti-corruption sweep. He has also tried to modernize, including by finally allowing women in the country to drive.

“He pretends to be a reformer when he’s really a war criminal,” Jodie Evans, co-founder of Code Pink, told TheWrap on Friday. “There is nothing charming about this prince.”

She said it was disappointing that after the #MeToo movement, Hollywood would meet with a man who is part of “the world’s most misogynistic, patriarchal, and repressive regime.”

These stars have moved beyond the entertainment realm

When you're raking in those big showbiz paychecks, you have to find a place to invest your cash. And for these Hollywood celebs, moonlighting as tech entrepreneurs is a serious business.