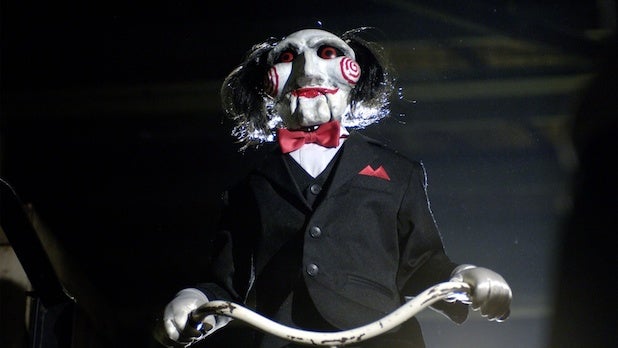 “Saw” is the most successful horror franchise in history, as the seven films in the series have grossed $874 million worldwide. The original film will return to theaters for one week only, with select screenings starting Thursday night on Oct. 30.

“The launch of ‘Saw’ was a signature event in Lionsgate’s history, establishing our first franchise and paving the way for our growth into a global studio,” said Lionsgate president of acquisitions & co-productions Jason Constantine. “We are excited for our fans to revisit the twisted magic that first blew their minds on Halloween 2004.”

“As part of ‘Saw’s’ 10th anniversary, we’re thrilled to give new fans and audiences the opportunity to experience this film on the big screen for the very first time,” added the film’s producers Oren Koules and Mark Burg, who were joined on the original movie by producer Gregg Hoffman.

“Saw” was the first collaboration for co-creators James Wan, who directed the film, and Leigh Whannell, who wrote the screenplay. Together, they also created the successful “Insidious” franchise, while Wan has gone on to direct such high-profile films as “The Conjuring” and Universal’s upcoming “Fast & Furious 7.”

SAW is a psychological thriller focusing on two men who wake up in a serial killer’s secure lair, with a dead body lying between them. The killer, nicknamed “Jigsaw,” leaves them tape recorded messages with details of how to make it out alive, including unthinkable acts of self-mutilation. The two men desperately try to find a way out, while also trying to figure out who’s behind their kidnapping.