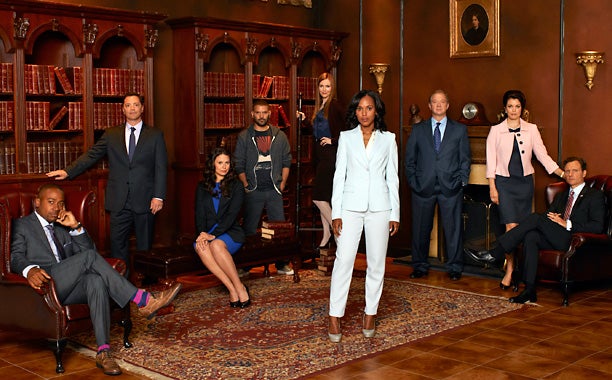 Pop quiz hotshots. If I used the word defiance, would you think Tea Party? If I said mole, do you call the dermatologist? Or are you a "Scandal" superfan who can never use those words again without thinking of secrets, lies and oh yes, scandal? People throw around phrases like high-class soap opera or guilty pleasure as if watching these shows takes them away from highbrow metaphysical fare or PBS documentaries when in reality, they’re really watching "Duck Dynasty." Shows like "Scandal" are a cut above standard soap-opera fare because they make you feel smart even as they stay three ludicrous steps ahead.

The secret to "Scandal’s" success is that it delivers everything in one devastatingly effective booster shot. You want romance? You’ll have to cool off your tablet. Workplace relationships? More than you need. Spies? How about super spies? Political intrigue? Viewing should count as credits towards a poly sci degree.

"CSI"-style investigations? Can’t you try a little bit harder? Instead of coming off like a derivative mélange, the show transcends all these genres to create a new one, with just itself as competition.

I was introduced to the show a few weeks ago by my friend Karen, who knew that 20 minutes would be enough to trigger marathon viewing. The first season’s different in tone, a little lighter, more focused on the week’s crisis and less about the big picture but it sets the stage for the big draw of Olivia and Fitz. The second season starts off supersonic and doesn’t come up for air.

This is a show that has people accessing hit men like they’re choosing couches off Craigslist while juggling a gay couple’s adoption and someone’s nervous breakdown – all realistically, all in the same episode. But it ain’t bragging if you can do it, and "Scandal" pulls off the magical feat of making 42 minutes of TV feel way too short.

Shonda Rhimes‘ fairy dust settles here differently than on her previous successes, "Grey’s Anatomy" and "Private Practice." Those shows didn’t work for me because they felt derivative and I never got excited about the actors. On "Scandal," Kerry Washington brings life and death passion to every moment — the woman does a great quivering lip — all in a high end neutral wardrobe that never wrinkles or need dry cleaning despite the murder and mayhem she deals with.

Her team isn’t as memorable for me, although each has delivered strong performances this year. It’s the White House trifecta of President Fitz, his Lady MacBeth Mellie and his power-mad Chief of Staff Cyrus that supply gasp-worthy moments along with quality acting that elevates the lunacy of the show’s twists and turns.

This week brings the show’s season finale, which promises to be an epic OMG moment, and considering that those are the show’s specialty, sets a very high bar. But the biggest scandal here is that there’s actually a show that hasn’t come up for air all season long and has us joining in the heavy breathing and gasping.

Dirty politics with the team from "Scandal"? That’s a campaign promise I can get behind.