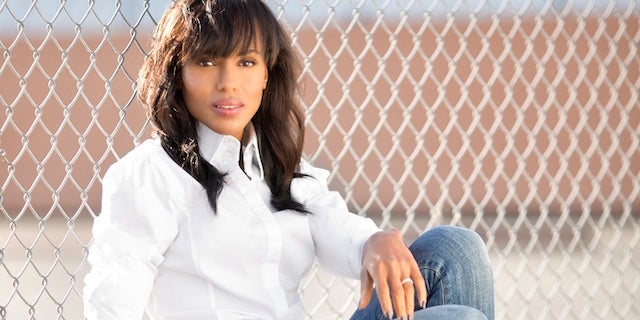 The second season of ABC’s “Scandal” left none of its characters with a clear claim to its proverbial “white hat.” Even Olivia Pope, the show’s lead gladiator, made some hugely unethical decisions – even beyond an affair with the President.

When we last left her, the world discovered that she’s President Grant’s (Tony Goldwyn) mistress, which will unleash a flurry of problems for Olivia and put a target on her back. She had just resolved to reclaim her firm’s mission of helping those in trouble and giving her clients fresh starts.

Can she do the same for herself?

TheWrap recently interviewed Emmy-nominated star Kerry Washington on the set of the drama. She talked about where fans will find her character when the series returns for its third season on Thursday, Oct. 3 at 10 p.m. ET.

TheWrap: We’ve learned a lot about Olivia. We know her father and we’ve now seen her a lot younger. Going into this season, how do you feel you know her now?
Kerry Washington: It’s really fascinating, this way of working with [creator Shonda Rhimes], because it’s almost the exact opposite of how actors normally approach the process of creating a character. Normally you build all of these layers and you have all of this information and you build this backstory and it informs your choices. With Shonda, we’re constantly discovering more and more about the characters as you go along. It’s really fascinating for me. Because I’ve never really worked in television, it’s an exciting way of working for me to keep getting this information that you need to thread into the character.

When I found out about Olivia making the decision to rig the election, it traumatized me! I mean, It traumatized me! I remember I had just gotten back from the Democratic National Convention and I had just given this big speech on the importance of every vote and, you know, voter inclusivity, and we all have to show up at the polls. And then I got back to work and my character was rigging a national election. It just felt so tragic and yet wonderful. I realized, ‘This is why the white hat is important to her, because people make mistakes.’ I love that all of the layers we get add to the humanity of the characters.

Do you still think her claim to the white hat is as strong now that she’s rigged the election and everyone knows she’s been sleeping with the president?
We learned something, which is that in the very final episode there is that moment where Olivia says, ‘I’m their gladiator’ to the President, ‘I can’t abandon them, I’m their gladiator.’ And then he goes to Mellie and puts his head in her lap. And then there’s a time lapse where she’s up and running, and we learn that it’s about a month in between when she says, ‘I’m their gladiator’ and when she goes out to run and gets accosted by the media.

In that month, I think that Olivia really had decided — and Pope and Associates talked about it and we all decided, ‘We’re done. We’re done now. I know about Verna. It’s all out in the open. It’s all on the table. We’ve got to wear the white hat. We have to go back to what this firm originally started to do, which is to be a light of justice and to give people a second chance and to help people redeem themselves.’

When this tragic moment happens and when she’s faced with her father, it’s at a moment where she really is claiming the white hat in her life. That’s where we get to start the show: How is everyone coping with this very personal scandal in light of the fact that they have committed to wearing the white hat?

Do we pick up right away from the Season 2 finale or is there a time jump?
We pick up moments later.

Is Olivia a person who goes out for revenge? Everyone is wondering who leaked her name?
You’ll find out. You’ll find out in the premiere. She’s committed to following the path of what is most ethical. Faced with this scandal and that commitment it’s a conflict and it’s exciting.

Watch the first teaser for Season 3 below: