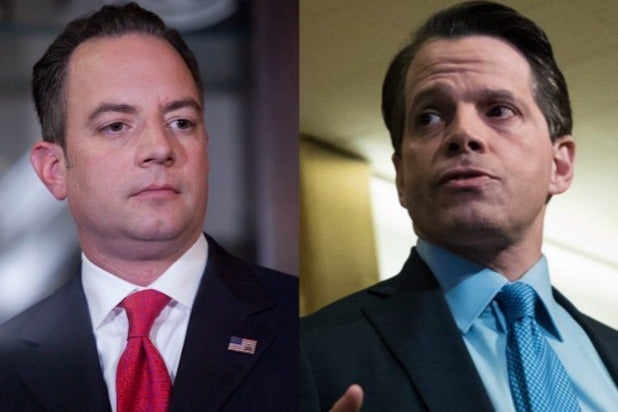 Schwartz later told the New York Daily News that he wasn’t sure whether his claims were actually true, saying that the affair allegations were “just rumors that have been going around for a while.”

“I wasn’t expecting anybody to pick up on it…It was a mistake and I regret it and I apologize to Reince,” he said. Schwartz also told the Daily News that he wasn’t going to take down the tweet  because he thought that it would draw more attention to the claims, but later removed it and replaced it with a tweet apologizing to Priebus.

I deleted my tweets re @Reince & apologized to him. Pretty sure he’s not accepting my apology. Can’t blame him. I’m ashamed of what I said.

.@Reince is a better man than me; he accepted my apology. I did something stupid and I’m embarrassed. Keep the hits coming – I deserve it. https://t.co/JXRQoX5aWo

Following the retraction, Schwartz got into a heated exchange with CNN’s Jake Tapper, who identified Schwartz as a spokesman for Scaramucci. Schwartz denied this and insisted he is just a friend of the communications director despite being quoted several times claiming he was a spokesman. Schwartz explained his previous quotes by saying that Scaramucci “called to yell at me & told me to cut it out” after he claimed to speak on his behalf. That tweet, along with others, has since been deleted.

.@ArthurSchwartz did your friend @Scaramucci ask you to do this trashing? https://t.co/BJhmLEffiR

You weren’t asking why. Keep it up. We can hash this out in court.

Priebus left the White House staff on Friday, and Homeland Security Secretary Gen. John Kelly takes over his position July 31. The day before, Priebus was one of Scaramucci’s targets in a profanity-filled rant against White House staffers made to New Yorker reporter Ryan Lizza, with the new communications director calling Priebus “a f—— paranoid schizophrenic.“