Want a good scare this Halloween? Well, start by thinking about how many hours are gonna be lost each week now that “So You Think You Can Dance” is back in its full bedazzled glory.

It’s no secret that the dance shows are not my favorite reality subgenre. There’s just not enough backstabbing, drunkenness or fat people.

You may be surprised to discover that my favorite reality shows are actually the ones dealing with the paranormal.

That’s right; I said it.

I am obsessed, though it’s usually not the kind of information I like to lead with when meeting new people. (Neither is my strange obsession with wax museums, nor the elation I felt when I learned that Diablo Cody was penning a movie based on the “Sweet Valley High” series.)

Remember the old “Unexplained” segment on “Unsolved Mysteries"? Robert Stack’s eerie appearance in the mist came at a time in my life when my thirst for the unknown was no longer being quenched by checking out “13 Alabama Ghosts and Jeffrey” every week on “library day.” ( BTW — that book was in high demand and sometimes I had to settle for books about Tennessee, Georgia and even — gasp! — Mississippi ghosts … and Jeffrey, of course; he gets around apparently.) 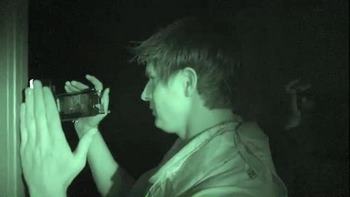 Sure, I’m glad that interest in the spiritual world has become more mainstream. In the past, people who were curious about the unknown were stereotyped. And let’s face it; wearing black all the time just seems so … well, somber. On the other hand, though, I’m not sure that the ghosts are really feeling the whole Hollywood douchebag look.

But if you are, then the Travel Channel’s “Ghost Adventures” may be the reality show for you. “Bros” Zak, Nick and Aaron are not the lost Jonas Brothers, but the manscaped investigators for the show. Their goal seems to be to draw out spirits by antagonizing them whilst wearing Ed Hardy gear. Bad idea in my opinion. Perhaps I could lend them my copy of “The Complete Idiot’s Guide to Communicating With Spirits.” (Yes, an actual book that I own.)

I have to admit, though, that their experiences seem authentic, and the show may be worth your time if you can tolerate all the exclamations of “bro!” and “dude!” (I cannot.)

Every episode begins with this voiceover: “Each year, PRS receives hundreds of reports of paranormal activity … only responding to the most severe.”

I have to say that I just might fake some activity to receive a visit from Ryan Buell, founder of Penn State’s Paranormal Research Society and the dreamiest of all the reality investigators. If he’d get rid of that tacky man earring, I could see a future for us (sorry Anoop!), though he must be an ninth-year senior by now.

While there is much internet chatter claiming that the show is not “real,” I’d argue that neither was “The Sixth Sense” and it still scared the crap out of me. True, PRS could launch an investigation based on someone passing gas, but it’s a guilty pleasure nonetheless.

I think the fact that it is a college group adds to its appeal, too, as I can well recall skipping class on the days that world-famous psychic Sylvia Browne was featured on the “Montel” show. There is a payoff in every episode, whether it’s a door slamming or the performance of an exorcism.

While “Paranormal State” always delivers in the drama department, “Ghost Hunters” can be a little anticlimactic. Nevertheless, this show is probably the most authentic representation of what ghost hunting is all about.

You’re not going to catch an EVP or a full-bodied apparition on every investigation. Mostly, paranormal investigations are about reviewing hours of evidence in real time and coming up with no conclusive proof of a haunting.

That being said, the episode where TAPS investigated the site of the Manson murders had me sleeping with my David Archuleta night light for at least a week. The evidence caught was truly chilling and seemed to have more weight to it than the “Paranormal State” cases, as Ryan & Co. seem to find something on every outing. Grant and Jason’s blue-collar sensibilities just reek of sincerity. (Or is that smell left over from one of their Roto Rooter jobs?)

Keep an eye out for “Ghost Hunters Academy,” premiering Nov. 11 on SyFy. 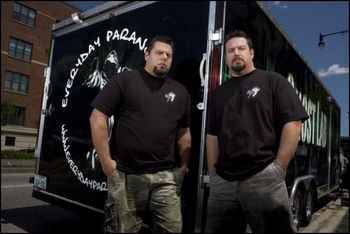 This program just debuted this month. The Everyday Paranormal team, headed by the Klinge brothers, Brad and Barry, has the same “everyman” relatability as TAPS. The difference? They utilize the outside opinions of experts such as neuroscientists and anthropologists. (I mean, face it, Grant and Jason, plumbing can only get you so far.)

While it’s too early to tell if this show will survive among the influx of ghostcentric shows, I advise giving it a chance.

This show aired as a “two-night special event” the past two Mondays and my understanding is that it may be picked up as a series depending on audience reaction.

My reaction? It is much like “Ghost Adventures” as far as antagonizing ghosts. In fact, the three investigators — Shaun, Nathan and Jason — even go as far as burying each other alive and offering up their own blood in an effort to taunt the spirits.

The scariest part of this show? The “acting.” It is worse than Dina Lohan’s portrayal of a responsible mother on “Living Lohan.” If you’re gonna fake your show, you might as well hire real actors. How about Katie and Micah from “Paranormal State?”

Additionally, may I suggest a drinking game? For every time someone refers to “pushing it to the limit” or “pushing the boundaries,” take a swig. Much like the “Biggest Loser” “my weight loss journey” drinking game, you’re guaranteed to have a good buzz by the third commercial break.

This show is entertaining, but not for the reason intended. Stay tuned to see if it’s picked up.

For believers and non-believers alike, each of these shows is intriguing for different reasons. In fact, “Ghost Adventures” has even been featured on (best show ever!) “The Soup.”

Keep an eye out for these special Halloween episodes: