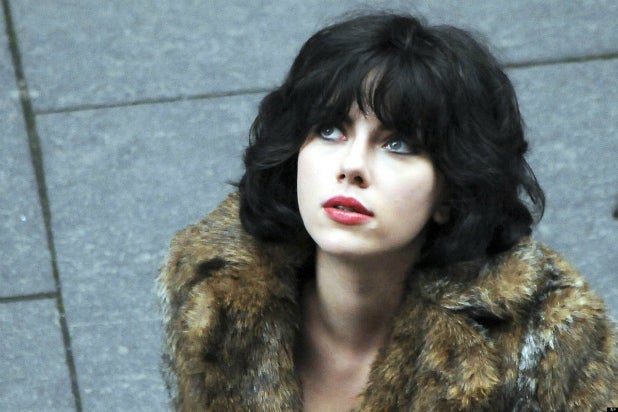 Scarlett Johansson pulled off an impressive double-play at the box office this weekend.

While Disney’s Marvel superhero sequel “Captain America: The Winter Soldier” — in which she plays the Black Widow — was soaring to $96.2 million in its domestic debut, Johansson scored big at the specialty box office, too.

The R-rated sci-fi movie “Under the Skin,” in which she plays a gorgeous but man-eating alien in Scotland, recorded the second-best limited debut of the year.

The A24-distributed thriller took in $140,000 from four theaters. That’s a $35,000 per-screen average, the highest of any specialty release this year, with the exception of “The Grand Budapest Hotel,” which averaged $202,792 in its four-theater March opening.

Also read: ‘Under the Skin’ Review: A Is for ‘Alien’ and ‘Arthouse’ in This Oblique Scarlett Johansson Puzzler

“Under the Skin” is the first movie from director Jonathan Glazer (“Sexy Beast”) in a decade. Produced by James Wilson and Nick Wechsler, it was written by Glazer and Walter Campbell and is an adaptation of Michel Faber’s 2000 novel of the same name.

“Under the Skin” built some momentum on the festival circuit, screening in Venice, Toronto and in Telluride, Colo. Its premiere last month in Los Angeles was the first screening in 25 years at the historic United Artists Theater at the downtown Ace Hotel. And it has a strong 86 percent positive rating on review aggregation site Rotten Tomatoes.

With “Captain America: The Winter Soldier” averaging roughly $23,000 from its 3,938 locations, Johansson’s movies had the two top per-screen averages in the marketplace.

Also read: 7 Alternative Movies to See Instead of ‘Captain America’ This Weekend

Elsewhere in the speciality market, the Jude Law comedy “Dom Hemingway” brought in $32,000 for an $8,000 per-screen average for Fox Searchlight.

The Halle Berry drama “Frankie and Alice” opened on 171 screens and brought in $350,000. That’s a 2,047 per-theater average for the release from Lionsgate’s Codeblack Films. “Frankie and Alice” stars Berry as a go-go dancer in the 1970s who struggles with multiple personality disorder and has a 7-year-old and a white supremacist as alter egos.

Stellan Skarsgard, Phylicia Rashad and Chandra Wilson co-star in the film, which is directed by Geoffrey Sax. It received a brief awards-qualifying run in 2010, and Berry was nominated for a Golden Globe, but never had a wide release.

The CBS Films horror movie “Afflicted” was making its biggest mark via downloads rather than at the theaters.

Derek Lee and Clif Prowse wrote, directed and star in the micro-budgeted found-footage thriller, which brought in $68,300 in 44 locations for a $1,552 per-screen average.

However, it was No. 1 on the iTunes Horror Chart, above two other debuting films, “Alien Abduction (No. 2) and “Stage Fright (No. 17). It was 25th on the overall iTunes charts, above every other limited/VOD release.