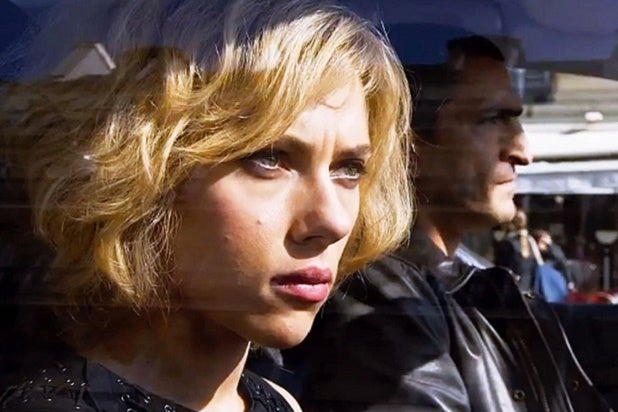 “Lucy” is flexing its muscles at the overseas box office.

The sci-fi thriller starring Scarlett Johansson as woman who gains superpowers after a drug expands her brain capacity to its utmost limits, was the top-earning movie internationally this weekend. It brought in $34 million from 43 foreign markets, most of them for Universal Pictures, and upped its overseas total to $103 million. With its $113 million domestic haul, it’s over $216 million worldwide.

“Lucy” opened at No. 1 in 11 markets and held onto the top spot in Germany for the second week.

The top territory was Taiwan, where it opened on top with a strong $6.3 million. That’s the second-largest opening ever for a Universal movie there, behind only “Fast & Furious 6,” and the best ever for a Besson-directed film in that market.

And “Lucy” isn’t done yet, with 22 territories markets still to open, including Japan, Brazil and Mexico.

Disney’s “Guardians of the Galaxy” was the No. 2 moneymaker at the foreign box office with $20.7 million from 67 markets. It has brought in $237 million from abroad, and its global total is up to $489 million.

Fox’s ‘How to Train Your Dragon 2” took in $18.2 million from 27 markets and lifted its foreign total to $402 million, with Brazil, Mexico and Japan ahead. It’s at $575 million worldwide.

Paramount’s “Teenage Mutant Ninja Turtles” brought in $15.5 million from 36 markets, upping its foreign haul to $93 million and its global take to $239 million.

“The Expendables 3” gained some steam overseas, raking in $16.5 million from 31 foreign markets for multiple local distributors. That lifts its international total to $37 million, well ahead of its $27.5 million domestic take after two weeks.