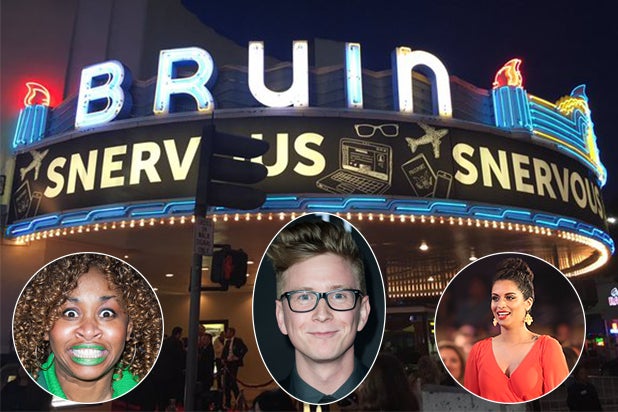 Tyler Oakley may be the star and producer of “Snervous,” the documentary chronicling a behind-the-scenes look at his life on the road during his “Slumber Party” tour, but just because his face covered a block of Westwood in Los Angeles at the premiere on Thursday night, that does not mean he got final cut on the feature.

“A lot of (the footage) I was like, ‘Please take it out,'” Oakley told the packed Bruin Theatre. “They didn’t … so enjoy.”

Slipping between umbrella holders shielding digital pals like Lilly Singh, Glozell Green and Awesomeness CEO Brian Robbins from both td the tween shrieks in the crowd, see below for the best quotes and moments from the red carpet.

No ‘Serial’ and ‘What College Football Playoff’?
A video career born in a dorm room at Michigan State doesn’t automatically lead to a deep Spartan fandom. Do not expect Oakley to be in Texas rooting for his team in the college football playoffs on Ne spending time consuming the new season of “Serial” that was also released this week. TheWrap “airballed” by asking which event holds a higher priority in his media consumption diet.

“Are we in the playoffs?,” Oakley asked. “I think that answers your question. [Actually] I do care more about Michigan State being in the final. Is that what they call it in sports?”

Also Read: Why CBS Is Loading 'The Amazing Race' With Social Media Stars

YouTube Millionaires Buy Their Own Milk Duds
We may have discovered one factor making day-and-date VOD releases featuring digital personalities so profitable: a cash-bar for concessions at the premiere.

There would be no free popcorn and soda at the Bruin on Thursday night. In contrast, during Quentin Tarantino‘s 12-minute intermission for “The Hateful Eight,” The Weinstein Co shelled out for two rounds of free concessions, and even in health conscious Hollywood, a surprisingly high contingent went back for a second tub of glowing heart attack kernels.

“Are you f–king kidding me?”
That was Robbins‘ reaction when Oakley told him he would be off the grid and 100 percent unavailable for the promotional month leading up to the “Snervous'” release. Oakley competed on CBS’ “The Amazing Race” and logged November in digital and media silence trotting around the world with producing partner Korey Kuhl.

“Years ago when making movies you would be so out in front of a movie, eight weeks out, 12 weeks out,” Robbins told TheWrap. “(Now), we really want to be promoting the movie when the movie is available.”

So does this mean we should not expect to see an “Awesomeness Films” Comic-Con panel about future fall slates in years to come? “No, you should.”

Glozell Green has “Amazing Race” aspirations
“Queen of YouTube” Green rolled down the carpet in a green wheelchair with three handlers navigating amongst media outlets, and when asked, she admitted to being properly bummed at being left off of CBS’ upcoming social media star season of “The Amazing Race.”

“I got kids on the way,” Green said. “My surrogate is pregnant and I need a job.”

Superwoman is in L.A.

“I live in L.A. now,” the Lilly Singh said to answer Oakley’s surprise at seeing her. Like the star of the night, Singh also has a YouTube-provided Sunset Strip billboard pushing her forward as a face of their brand.

“Superwoman” Singh scored even more choice real estate this week: She has the first feature in YouTube’s “Rewind,” the video king’s in-house mega-collaboration featuring all the biggest social media stars of the year. Within its first 48 hours, it had over 32,000,000 views.

The Streamys are going to India
YouTube’s Rewind was a high topic of conversation overall, especially for Drew Baldwin (founder of both digital trade Tubefilter and the Streamy Awards).

“My extended family — my mom, the people who are not in the industry — said ‘I recognize all those people (in “YouTube Rewind”) from the Streamy Awards.’ We’ve made it. When my mom knows, when the auntie knows, when the cousin knows (we’ve made it).”

The Streamys are getting formatted internationally and heading to South Asia in 2016, after making the leap to U.S. TV this year. First up: a show in Mumbai targeting the India, Pakistan, Bangladesh, Sri Lanka, and Nepal markets.

Presidential Succession
“I knew nothing about YouTube before I started this project,” director Amy Rice told TheWrap. “I’m learning the audience as I’m shooting.”

Rice’s last two documentary subjects worked together this year: President Obama and Oakley, when the latter participated in an Oval Office White House Health Care Summit with a curated slice of personalities from the digital world.

“When I filmed (Obama and Oakley) at different times, they both were championing very inspiring messages,” Rice said, referencing her making-of-a-president doc in 2009’s “The People: The Election Of Barack Obama“. In the HBO film, Rice followed then-Senator Obama from May 2006 through election night 2008.

Champagne in the morning, no booze in the evening

The same Sunshine Sachs executives who launched the Golden Globe nominations in the early morning darkness at the Beverly Hilton on Thursday ended the day in the darkness in Westwood, making this a two-event, 18 hour day.

In a role reversal, while the Globes served champagne for breakfast, with many of the talent and guests at “Snervous” under 21, there was no boozy after party. Instead, Awesomeness took advantage of the timing to make the nightcap a company holiday party.

As Hollywood stars, media gurus and social elites descended on South Beach to circle the art scene, TheWrap’s Mikey Glazer highlights the best from the scene