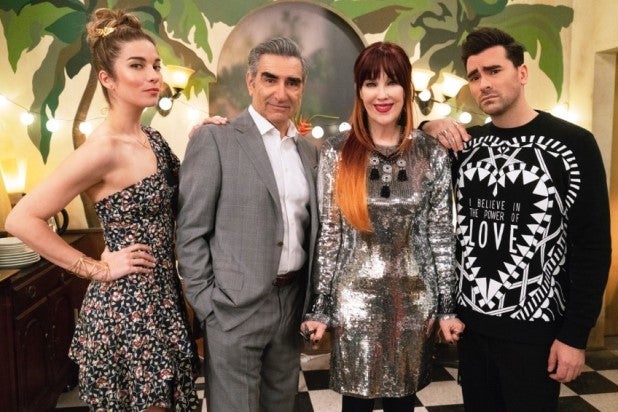 Hold on to your wigs, “Schitt’s Creek” fans.

According to a network statement, fans will be able to immerse themselves in “Schitt’s Creek” locations including the Tropicale Cafe, Rose Apothecary, and of course, the Rosebud Motel where the Rose family resides (no word yet if Moira Rose’s wigs will adorn the walls). There will be interactive photo experiences, takeaways and merchandise.

The Canadian show is shot at Pinewood Studios in Toronto, Ontario, and wrapped production on its sixth and final season over the summer.

“We are constantly asked by fans if ‘Schitt’s Creek’ is a real place they can visit, and it is beyond exciting to finally be able to say ‘Yes!'” said Brad Schwartz, President, Pop TV. “It is the perfect way to kick off our final season and say one big final thank you to the best fans in the world that have made all this possible.”

Tickets to the pop-ups will be free but limited. Fans can get more information about the pop-ups on the website here.

Those who cannot attend the pop-up can still own a piece of the show. Wardrobe and memorabilia from the show will go on sale Thursday to benefit the LGBTQ organization GLSEN. Items will include Moira’s (Catherine O’Hara) couture and designer dresses, and David’s (Dan Levy) famous monochromatic sweaters. The online sale will start at 9 a.m. PT/12 p.m. ET here.

“Schitt’s Creek’s” sixth season returns with 14 new episodes on Tuesday, Jan. 7, 2020 at 9 p.m., ET/PT. All five seasons are currently available on the network’s app, PopNow, at POPTV.com and via cable and satellite video on demand. Season 5 drops on Netflix on Oct. 10.

Pop-ups have become an increasingly popular marketing tool for studios to promote their new shows or home entertainment. Shows including “Saved by the Bell,” “Beverly Hills 90210,” and “Friends” have all had immersive fan experiences.