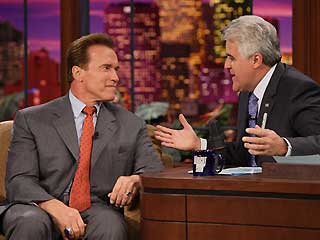 “The Jay Leno Show” has proven to be a difficult place to draw a mass audience for NBC this season, but it is apparently a decent platform for announcing high-level state government appointments.

According to an NBC press release, California Gov. Arnold Schwarzenegger used his appearance on Monday’s episode to trumpet the appointment of state Sen. Abel Maldonado to the office of lieutenant governor.

“(Sen. Maldonado) is a terrific, loyal man that has worked very hard in public service,” Schwarzenegger told Leno, according to an NBC release. “But he’s also into bipartisanship and post-partisanship, so he can reach across the aisle. He makes decisions based on what’s best for the people rather than what’s best for the party. He has helped us many times pass a budget, which was very important.”

Schwarzenegger is a regular guest of Leno’s. He previously appeared on the Leno-hosted "The Tonight Show" to announce his own run for governor.